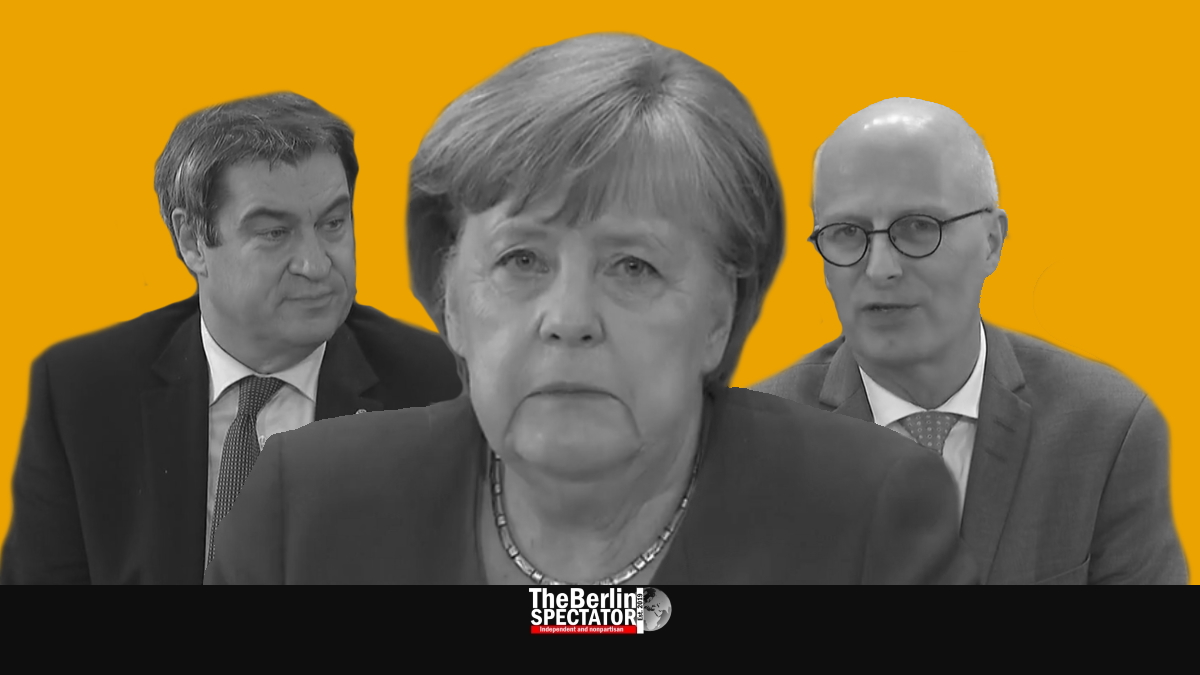 After Chancellor Angela Merkel and the First Ministers decided to ease Corona rules, some of the sixteen federal states within Germany already came up with their own versions of the plans. Some are going rather far.

Once they were finally done discussing the new Corona rules, Angela Merkel, Hamburg’s First Mayor Peter Tschentscher and the Bavarian First Minister Markus Söder sat down in front of the cameras to announce the outcome.

The old distance rules continue to apply until June 5th, masks are mandatory in shops and public transport, while the contact rules were eased. People from two households may now be together outdoors. Shops and malls are allowed to open under certain conditions. Later in May, televised ‘ghost matches’ will satisfy Germany’s soccer fans. Sports activities outdoors will be legal again.

More children will be allowed to return to kindergartens, schoolkids will see their classmates again before the summer vacations commence. Here, the federal states decide about the details. The same is the case in most other areas. Playgrounds will reopen too.

A Hundred Days Into the Crisis

People in hospitals or homes for the elderly may welcome one contact person as a visitor multiple times. Restrictions apply here too. Large events are not supposed to take place until August 31st. (More details on the new Corona rules can be found here.)

On the 100th day after the first Coronavirus case was confirmed in Germany, namely Wednesday, Merkel’s online discussions had just been completed when some federal states announced their versions of the new normality.

In the city state of Berlin, the Senate convened 3.3 kilometers (2 miles) from the Chancellery, namely at Red City Hall. In the evening, it announced the new contact rules in the German capital would apply from May 9th, which is this coming Saturday.

Retail businesses, no matter what size, may reopen on Saturday as well. Most shops, malls and department stores in Berlin had already gotten the permission before. In Berlin, beauty parlors are allowed to reopen on Monday, May 11th. Of course strict hygiene rules apply. Music and art schools may offer classes in tiny groups.

Restaurants Back in Business

The big news for Berliners is this one: On May 15th, restaurants may reopen. Strict distance and hygiene rules apply and they have to close by 10:00 p.m. every day. But those famous Berlin parties will not be back anytime soon, since bars and clubs need to remain closed. From May 25th, hotels in Berlin have the permission to welcome regular guests again. On Monday, grades 1, 5 and 7 will be returning to school.

Today, the Berlin Senate intends to discuss things further and announce more rules. Berlin is being ruled by a center-left coalition consisting of the centrist Social Democrats (SPD), the left-wing Greens and the far-left party ‘Die Linke’. It sometimes takes Governing Mayor Michael Müller’s government a while to agree on things.

In Germany’s south-west, the federal state of Baden-Württemberg is implementing a ‘traffic light system’ for public life in the Corona crisis. Depending on the danger in any area, a red, yellow or green ‘light’ will show people what kind of risk they might be taking.

Bavaria had announced a lifting of bans and an easing of restrictions before Chancellor Merkel’s online meeting took place. They are basically in line with the decisions that were taken at the Chancellery. On Monday, all retail businesses in Bavaria may reopen. Schools will start reopening next week as well.

Brandenburg’s reopening schedule for businesses, including restaurants, is mostly in line with what the Berlin Senate announced. The government in Bremen said decisions would be taken on Tuesday of next week. Hamburg already reopened ‘Hagenbecks Tierpark”, the city state’s zoo, and its botanical garden on Wednesday. The city state is preparing to implement all decisions taken in Berlin.

The federal state of Hesse wants to go farther than all other states by allowing events with up to 100 people to take place under certain conditions. On May 18th, 2020, more students are supposed to return to school, and all of them by June 2nd. Mecklenburg Hither-Pomerania wants to allow tourists to sunbathe on its Baltic Sea beaches.

Merkel ‘Close to Giving Up’

More than before, the federal states will decide on their own. This applies to all Corona rules. The online discussion on Wednesday was supposedly difficult. Angela Merkel reportedly told the First Ministers she had been “close to giving up.” Since the beginning of the crisis, Mrs. Merkel has been among those who were more careful.

She made sure emergency rules apply. In case the number of daily new infections in any county or town exceeds 50 per 100,000 inhabitants for a week, measures will be taken in the affected region. Should there be an outbreak in one hospital or home for the elderly, any measures designed to curb the spread will concentrate on that particular establishment.

At yesterday’s press conference, Angela Merkel also showed some optimism. As long as everyone adhered to the contact and hygiene rules, there was a good chance the situation would not deteriorate. “This is a courageous path”, she said. “And we have to make sure the whole thing does not slip away.”

May 8th, 1945: Defeat of Nazi Germany was Liberation of Europe