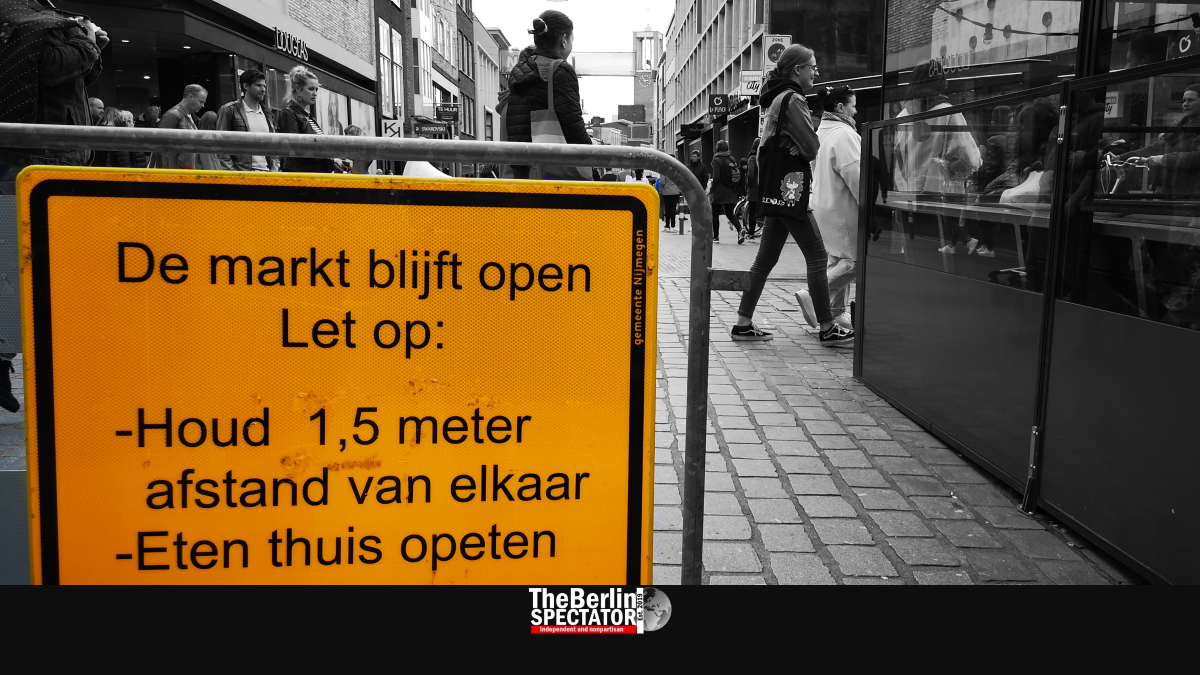 In the Netherlands, people are dying of COVID-19 at intensive care units again. Calling the number of new infections alarming would be an understatement. A new lockdown might be the only way.

Nijmegen, September 27th, 2020 (The Berlin Spectator) — In Nijmegen, a Dutch university city located just a few miles from the German border, life seems to be going on as usual. Thousands of residents stroll along the beautiful pedestrian zone with its medieval buildings. Nobody wears protective masks, even though the mandatory distance between people from different households, 1.5 meters (5 feet), cannot be kept in the crowd.

At a cheese shop, where they offer enough Gouda to feed half the continent, people stand in line outside, meaning they do follow the instructions on a sign at the door. More than three customers may not be present in the store at the same time. But they do not wear masks and squeeze back into the crowds on the street once they have the giant pieces of cheese they wanted.

At a supermarket in the Galgenveld neighborhood, not a single customer or employee wears his or her mask either. The reason is simple: People are not required to do so. A kind cashier who charges two German customers for some bread and two liters of lactose-free ‘halfvolle melk‘ confirms the lack of a mandatory mask rule in Dutch supermarkets is “weird”, considering the Corona situation.

The Opposite of Life

At Nijmegen’s central station, nobody uses masks either. The same applies to Starbucks inside the station. But on trains and buses, everyone wears masks because it is the rule. So, according to Dutch logic, those aerosols infected persons breathe out only spread in public transport, but not in supermarkets, Gouda stores or coffee shops.

The Netherlands are a small country of 17.5 million inhabitants. Thirty-eight of them died at intensive care units just yesterday. As it says in the first sentence of this article, life does go on as usual, on the street and in stores. But it is the opposite at Dutch ICUs. That is where the opposite of life is going on, namely death.

Since the Corona crisis hit Europe in January, the Netherlands have registered 113,400 infections (as of Saturday afternoon). In August, the number of Corona-related deaths per day was zero to four. Since the month of September commenced, it has increased constantly. Now it reached a new peak. On Thursday, 16 people died. The same number was reported on Friday. On Saturday, it more than doubled, to 38.

On its official website, the Dutch government explains the rules in a comprehensive way: “If you have symptoms, get tested as soon as possible and stay at home. Stay 1.5 meters away from other people. Wash your hands often. Cough and sneeze into your elbow. Work from home if possible. Avoid busy places and travel outside peak hours if possible.”

The thing is that the Dutch might be a bit reckless in regard to Corona rules. At least that is what Hubert Bruls believes. On a popular TV show he said a new lockdown would be needed if people did not improve their behavior what keeping their distance was concerned.

Bruls is not just anyone. As the Mayor of Nijmegen, Chairman of the Security Region Gelderland, which includes his city, and as Chairman of the Dutch Security Council, he has a lot of decision power. His hope was that the nation would be shocked about the alarming numbers and become more persistent in regard to the anti-Corona measures as a result. So far, it has not worked.

From Monday to Friday, 12,000 new Corona infections were reported in the Netherlands. Right now, there are about 2,700 new Corona cases per day, just like in Germany. But the big neighbor has five times as many inhabitants and very few Corona-related deaths.

Germany has declared several regions in the Netherlands high risk areas. Hubert Bruls’ Gelderland region is about an inch away from getting listed. But becoming a high risk area from the perspective of Berlin would be the least of his problems.

Bruls is forced to take important decisions. It is about nothing less than life and death. At the moment, death seems to be winning. This is what he and his colleagues in those Security Regions need to change right now. It looks like Hubert Bruls is not too optimistic: “I predict that there will be a lockdown. That’s where we’re headed.”