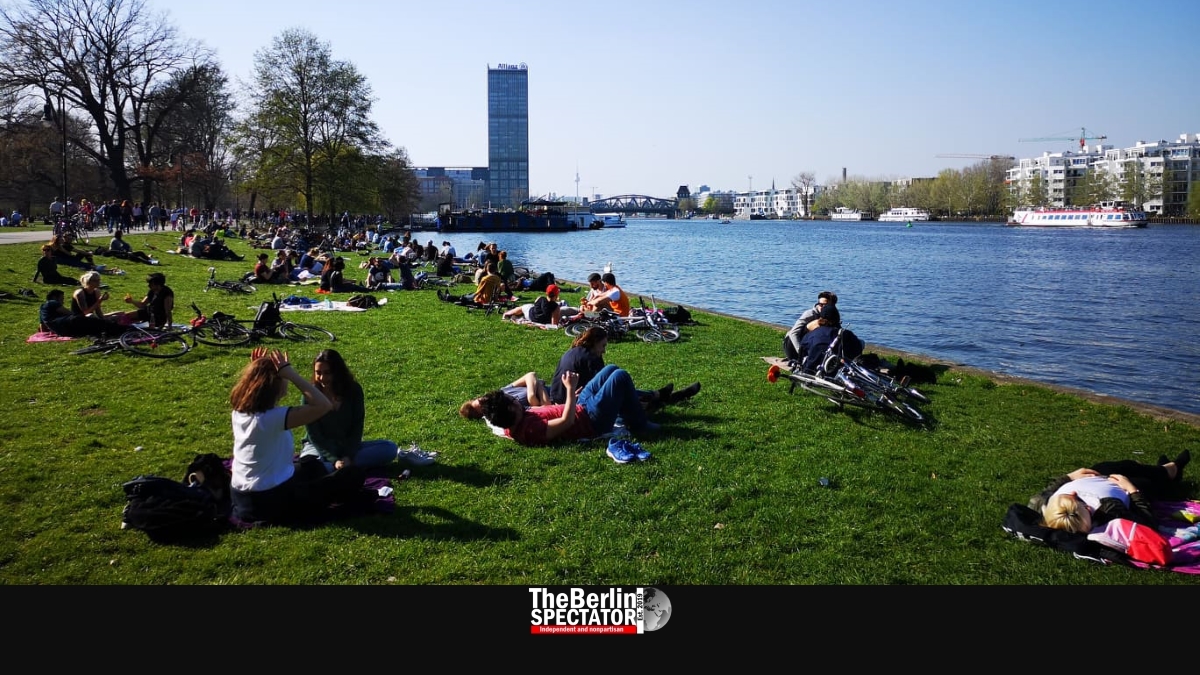 Some of Berlin’s parks are probably among the safest spots in the country. Others are not. The Berlin Senate came up with partially alarming numbers.

Berlin, July 20th, 2021 (The Berlin Spectator) — Berlin has a lot of parks and gardens. Officially, there are 2,500 of them, even though Google Maps does not seem to show quite as many at first glance. There are little squares with a lot of greenery, smaller parks, large parks and parks that are almost as big as Luxembourg. Berliners and tourists use those parks for recreation, sports and for parties. Children like playing at the German capital’s parks. So do the city’s 110,000 registered dogs, and probably just as many unregistered ones.

Volleyball, picnics and romantic walks are only some of the activities Berliners engage in at their many parks. But there are some individuals who go to the park to commit crimes. The most visible offense is the sale of illegal drugs. Especially at ‘Görlitzer Park’ and ‘Hasenheide Park’, dozens of drug dealers run their businesses. The police know what is going on, but cannot do much. The dealers know the police know what they are doing. And the police know the dealers know they know what they are doing. Many others kinds of crime have been registered at certain parks in the past few years as well.

The Berlin Senate provided numbers on crime at parks in an official answer to an inquiry handed in by Marcel Luthe, a member of the Berlin House of Representatives. He wanted to know how many crimes are being committed at 12 major parks and at former Tempelhof Airport, which has become one of Berlin’s most popular recreational areas. The numbers he got show there are big differences in regard to safety.

Among Berlin’s major parks, ‘Bürgerpark Pankow’ is definitely one of the safest ones. In 2020, only 30 crimes were registered there, including three break-ins, theft, assault and similar offenses. In only one case, someone was caught selling drugs there. During the first half of this year, 14 crimes were counted at ‘Bürgerpark Pankow’. The numbers from ‘Viktoriapark’ in Berlin’s Kreuzberg borough are almost the same. In some rural town at the end of the world, this spot would be a crime hotspot. Not in Berlin. Over here, this qualifies as safe.

At ‘Volkspark Schönholzer Heide’, in the north of the city, things look even better. From January until the end of June of 2021, exactly 2 criminal offenses were registered there, and both of them were more harmless ones. ‘Volkspark Rehberge’ is safe too. In this case, there were seven low-level crimes so far this year.

At ‘Tiergarten’, Berlin’s largest park, things look different. A total of 141 crimes were reported there during the first six months of this year. Those included five sexual offenses, 27 drug-related ones and battery in 17 cases. Still, ‘Tiergarten’ is not among the least safe parks in Berlin. During the day, it should be safe to go there, as long as people keep their eyes open. ‘Volkspark Friedrichshain’ is part of the same category. So is ‘Treptower Park’ (see photo at top of page).

You already guessed it: There are Berlin parks which are not quite as safe. At ‘Park am Gleisdreieck’, 166 crimes were reported from January to June, including four sexual offenses and lots of battery and theft cases. Caution is advisable here. The same applies to former Tempelhof Airport, where the crime situation is comparable. ‘Mauerpark’ is in this category too, with 131 crimes during the first six months of this year.

Hasenheide, a huge park in Neukölln, ended up in the news earlier this year because of what they call “crimes against health and life”. One homicide case war reported there. Several people were beaten up. With 104, the total number of crimes at ‘Hasenheide’ during the first half of 2021 seems rather low considering so many drug dealers are there 365 days per year.

Ready for the least safe park in Berlin? It is ‘Görlitzer Park’ in Kreuzberg. Almost 600 crimes were registered there from January to June. Only 66 drug-related offenses are on the list, a number that seems low because this park is one of Berlin’s hotspot for illegal drugs. The police are obviously having trouble catching the dealers in the act, which is why they announced a new strategy earlier this year. Lots of theft and battery cases are being reported there as well. The Berlin Police Department had to respond to three sexual offenses so far this year. Things are not improving. In 2017, only 682 crimes were registered at ‘Görlitzer Park’. In 2020, there were 1,160. Whoever goes there should watch it.