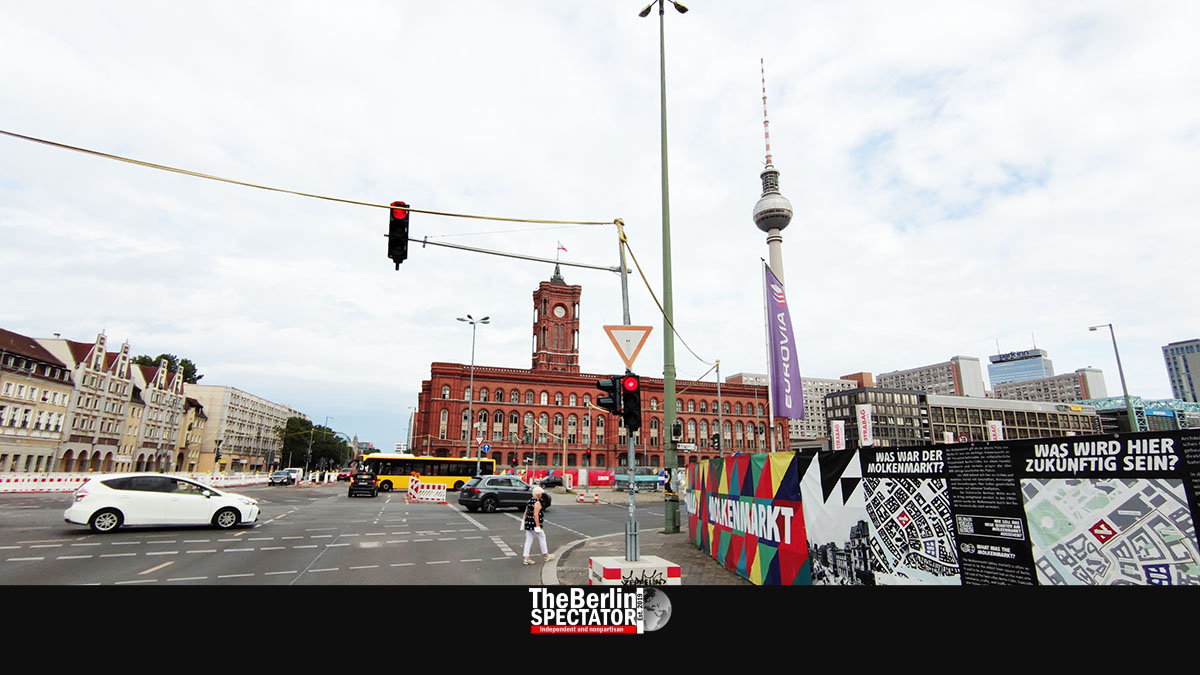 This coming weekend, ‘Querdenken’ and other organizations run by conspiracy theorists were going to stage a total of twelve protests in Berlin. The Police Department just banned all of them.

Berlin, July 30th, 2021 (The Berlin Spectator) — Berlin ist the capital of protests. There are some 5,000 of them per year. Restricting the freedom of assembly in a democracy is an issue. For this reason, this kind of approach is not being taken lightly by the authorities in charge. But, sometimes, there is no other way. When the first Corona waves peaked, demonstrations were limited to a certain number of participants.

Enforcing an adherence to Corona rules at protests is generally difficult. For instance, there was a big Black Lives Matter protest at Berlin’s Alexanderplatz square on June 6th, 2020, early on in the crisis. The thousands of participants were supposed to wear masks, which most of them did, and keep their distance, which they did not. First of all, there were far too many people on the square. Secondly the protesters were furious because of the killing of George Floyd by a cop in Minneapolis eleven days before and other cases of policy brutality in the United States. Keeping their distance was not their top priority in this situation.

With Corona deniers, things are far more complicated. Many of those conspiracy theorists do not believe Corona really exists. Corona rules, the same ones the police expect them to follow, are what they are fighting against. This is where things get tricky. Besides, the community of Corona deniers includes self-proclaimed ‘citizens of the Reich’ and other right-wing extremists who do not recognize the Federal Republic of Germany, let alone its authorities. Making people with these “views” wear masks and keep their distance is simply impossible.

There are even more problems the Berlin Police Department has to expect from protests staged by Corona deniers: They attack officers. They bring their children in order to make sure the police do not use water cannons. And they are a threat to politicians and institutions. On August 30th of last year, radical protesters of this kind broke a barrier and tried to storm the Reichstag building which accommodates the Bundestag. This kind of experience with conspiracy theorists and their extremist friends led to the latest decision.

In a statement, the Berlin Police Department confirmed as many as twelve protests registered for this coming weekend were prohibited. Notifications about the decision are being sent to some of the organizers today. Others already received them yesterday. But the problem is not resolved. That is because in the past months, many conspiracy theorists had ignored bans and tried to protest anyway. On May 22nd, 2021, and on other occasions, the police had to chase them through Berlin’s city center to enforce protest bans.

The Berlin Police said the latest decision to forbid twelve protests was based on the “extensive experience” with these protesters. Under consideration of all aspects, including the freedom of assembly, but also the fact that the participants of these protests usually did not accept the rules designed to protect people from infections, those protests had been prohibited. There was a big difference between this kind of protest and all other demonstrations, the police said.

More protests might have to be banned today. That is because the Corona deniers and right-wing radicals they partner with will likely register new ones. In spite of the bans, the Berlin Police might need enforcement from other federal states, in order to be able to deal with conspiracy theorists who might ignore the ban. By the way, there is yet another issue: Nobody knows whether the bans will hold up in court.