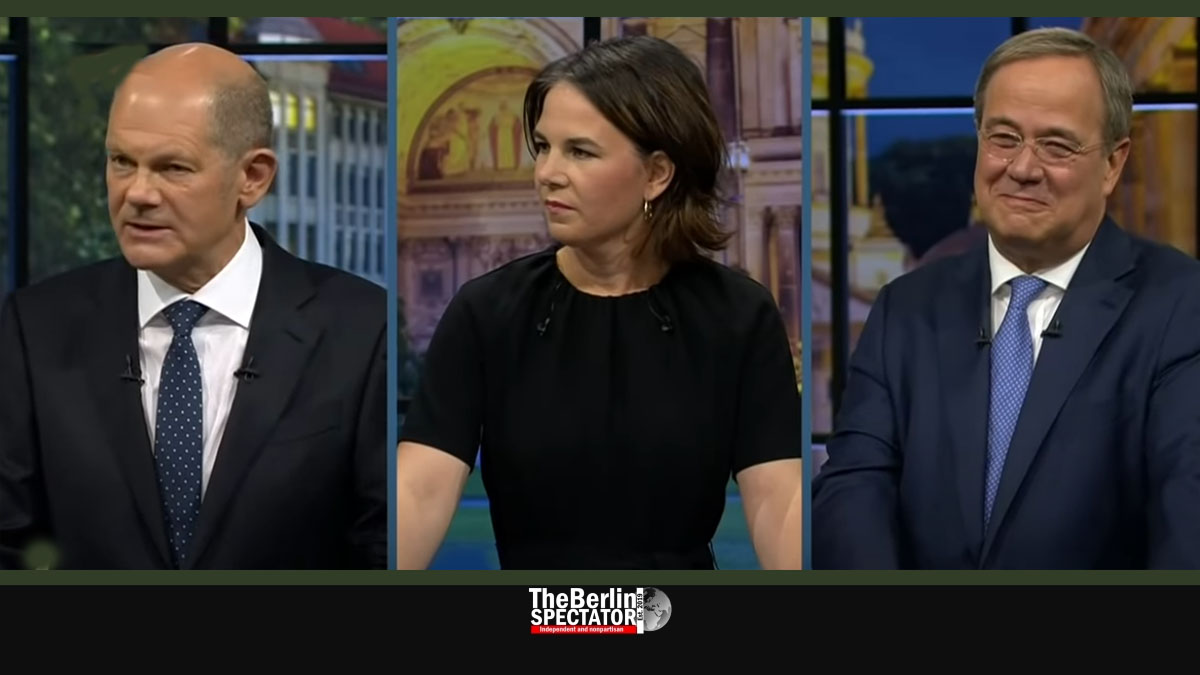 In Germany, Super Sunday is just around the corner. While the three candidates for Chancellor faced each other on TV again, the big question is: How reliable are the polls?

Sofia/Bulgaria, September 20th, 2021 (The Berlin Spectator) — In “Tachles Arena”, a video broadcast just produced by the Central Council of Jews in Germany, Armin Laschet was being asked what had gone wrong in his campaign. Considering his conservative CDU could end up with its worst result ever, if the latest polls turn out to be accurate, the question was justified. First Minister Laschet, the conservative candidate, had this to say: “I would recommend we wait and see.”

Laschet did have a point when he said things had changed several times during the election campaign. First, the Green contender, Annalena Baerbock, had been sold as the next Chancellor. Now that she was behind, it was the Social-Democratic candidate Olaf Scholz. “No. I believe this is an open race. This is a special situation, since a long-time Chancellor is not running again and three new candidates are coming.”

In the Council’s interview, he was being asked about his plans in regard to the fight against antisemitism as well, just like the other two candidates before him. During the interview, one of his problems became evident again. The issue Armin Laschet has to address all the time has a name: Hans Georg Maassen (German spelling Maaßen). This former President of Germany’s Federal Office for the Protection of the Constitution, who was fired in 2019, is considered a far-right politician. There are quite a few of those in the Federal Republic, but Maassen is a member of Laschet’s CDU. And not only that, but he is also running for the Bundestag in electoral district 196, located in the federal state of Thuringia.

Elections 2021: Candidates for Chancellor Face Each Other on…

Polls Are Only Polls

Laschet stated the constant discussions about Maassen’s controversial statements would valorize them. His party members in Thuringia had picked Maassen in a democratic process. As party chairman, he had to acknowledge this fact. Maassen is already doing damage. In case he ends up in the Bundestag, the CDU and its Bavarian sister party CSU will be in trouble.

What the race is concerned, Laschet is right. It is open, but the Social Democrats seem to be defending their lead in the polls by increasing their advantage. In the past four days, as many as seven polls were conducted by just as many institutes, namely Kantar, Forsa, Forschungsgruppe Wahlen, GMS, Infratest/Dimap, INSA and Yougov. The center-left SPD nobody believed in anymore until they overtook the conservatives a few weeks ago, is ahead between 2 (GMS) and 6 points (Kantar). At the same time, everybody, including the candidates for Chancellor, agree that polls are only polls. At the end of the day, the election result is what counts.

‘More of the Same’

In the latest and last TV truel before the elections, Armin Laschet, Olaf Scholz and Annalena Baerbock faced each other on Sunday. The Social-Democratic and Green candidates said they would work on getting a statutory minimum wage of 12 Euro (14 U.S. Dollars or 10.25 Pounds Sterling) per hour, while Laschet argued this question should be left to the social partners who negotiated salary agreements. Laschet said qualified nurses already had a minimum wage of 15 Euro (17.57 Dollars or 12.82 Pounds).

On one of the most important subjects of them all, the climate policy, Annalena Baerbock, the 40-year old Green candidate who was not even born when her party was founded in 1980, slammed both Laschet and Scholz: “As we can see, there are only two alternatives.” There was either more of the same, “by these two gentlemen of the grand coalition” or a persistent fight against global warming in a government headed by the Greens.

The elections on Super Sunday, September 26th, 2021, will be suspenseful. All three candidates for Chancellor have issues which could cost them the victories they are longing for. Laschet lacks support, even in his own party, Mrs. Baerbock made mistakes at the beginning of the campain, and Scholz’ success in the polls is partially connected to the weaknesses of the other contenders. On Super Sunday, there will not only be elections for the Bundestag, but also state elections in Berlin and Mecklenburg-Hither Pomerania. In all three cases, the SPD could win, according to the polls.