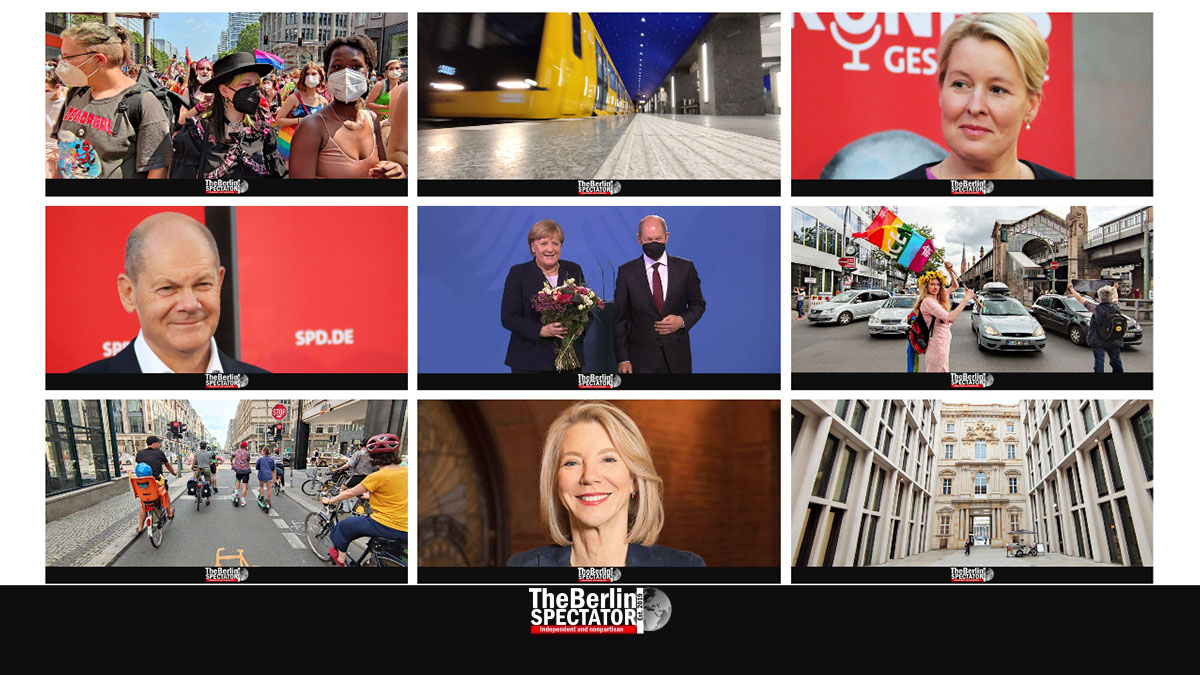 Photos: I. Marcus, Gutmann by Univ. of Pennsylvania, Merkel/Scholz by fed.gov.
Share

In late 2021, Germany had a new government and a deteriorating Corona pandemic. Not all news in the second half of the year were Corona-related though. What happened from July to December?

Berlin, December 28th, 2021 (The Berlin Spectator) — The first of two parts of this Year in Review feature (January to June 2021) can be accessed here. This is the second part.

On July 5th, President Joe Biden nominates Amy Gutmann to serve as U.S. Ambassador to Germany. So far, the current President of the University of Pennsylvania with German Jewish roots has not been confirmed by the Senate in Washington D.C.. If and when it happens, the 72-year-old will be the first woman to hold this position. Her father Kurt Gutmann fled Nazi Germany in 1934.

In July, the Corona infection numbers decrease, which is why some federal states ease their pandemic rules. For instance, more people may take part in cultural events. On July 1st, 2021, Germany’s Seven Day Incidence stands at 5.1. The Robert Koch Institute reports 892 new Coronavirus infections. Even movie theaters reopen. Towards the end of the month, there is talk about new restrictions, because the infection situation deteriorates yet again.

In Israel, President Frank-Walter Steinmeier meets his departing colleague Reuven Rivlin. On July 2nd, he says Germany would continue to stand by Israel’s side “and Israel can count on my country’s friendship, no matter how quickly the world is changing, and no matter who might be Chancellor soon.” He also says there needed to be a perspective for peace.

On July 9th, 2021, Berlin’s main public transport provider BVG opens its “subway to the stars”. ‘Museum Island’ is a very touristy new ‘U-Bahn’ station. Seven museums are located here. So are the new Berlin Palace and Berlin Cathedral. The station itself features a star-spattered sky. ‘Museum Island’ is the last of three new stations on the ‘U5’ line. Its construction was rather complicated. The ground had to be frozen in order to prevent the Spree river from flooding the station.

In mid-July, 196 people die in the worst flooding Germany has seen in decades. Parts of North Rhine-Westphalia and Rhineland-Palatinate are affected. The flood destroys homes, buildings of all kinds, streets, roads and bridges. The water even damages the Autobahn at several locations. Chancellor Angela Merkel, President Frank-Walter Steinmeier and many other politicians visit Ahrweiler and other destroyed towns and promise aid to those affected.

On July 24th, 2021, the LGBTI community and its supporters populate the streets of Berlin for another Christopher Street Day event, the second one that summer. This time, most participants wear Corona masks. Like the first CSD in June, it is a colorful celebration of diversity in several ways.

On July 21st, the Humboldt Forum in the new Berlin Palace opens to the public. The Palace is one of the most fascinating buildings in Berlin, also because it was built three times. Its first version was erected in 1443. Over time, it grew, became more elegant and accommodated all kinds of rulers. During the time of the Weimar Republic, the Berlin Palace housed a museum and a concert venue. In 1945, 502 years after it was built, it was badly damaged when the Allies bombed Berlin shortly before they finally defeated Nazi Germany. After the reunification, an original-sized model of the Palace was set up. Then, from 2013 to 2021, the Berlin Palace was rebuilt from scratch.

On August 1st, 2021, the Berlin Police Department loses control of thousands of Corona deniers who protest against the Corona rules in spite of the fact that their rallies had been banned beforehand. For hours, the participants walk through the center of Berlin. Most of them are not being stopped by the police, even though they ignore all Corona rules.

In the meantime, several German states try to be creative in their efforts to speed up the Corona vaccination campaign. Berlin opens vaccination centers on Ikea parking lots, trades doner kebabs for vaccinations and urges everyone to accept the vaccination offers, including the members of the German capital’s large expat community. Health Minister Jens Spahn talks about a “pandemic of the unvaccinated” as the infection numbers increase in the middle of the summer.

Later in August, several locomotive engineer strikes bring the better part of Deutsche Bahn’s railway system to a halt. On August 15th, Germany has no choice but to pull its soldiers out of Afghanistan along with the Americans and other allies. The pullout creates a dangerous situation for Afghans who cooperated with Western states and were left behind. The Taliban are back in control quickly. On August 17th, Angela Merkel concedes the mission in Afghanistan had not work out as intended.

In early September, Berlin’s Festival of Lights mesmerizes tens of thousands of spectators, including The Berlin Spectator. The Berlin Senate announces it will posh up ‘Unter den Linden’, the most elegant boulevard in the city, and it intends to build a huge network of bike lanes. Its total length is supposed to be 3,021 kilometers (1,877 miles). In a way, Berlin will be turned into Amsterdam.

In the meantime, nurses and other caretakers in the capital go on strike for several weeks. They demand an improvement of their work conditions.

The big day, Super Sunday, is coming closer. The candidates for Chancellor and the main candidates in the federal states of Berlin and Mecklenburg-Hither Pomerania face each other on German television. Munich’s Oktoberfest is cancelled because of Corona.

Then, on September 26th, 2021, the elections take place. The Social Democrats (SPD), who had been drowning in almost all polls and elections for years, score a triple win. They beat the conservative CDU and the Greens on the national level and in the two state elections of the day. In Berlin, there is trouble. Irregularities at some polling stations are reported. In several cases, voters receive the wrong ballots, and the delivery of the right ones takes ages, also because of the Berlin Marathon which takes place on the same day.

While the CDU is busy dealing with itself, its failed main candidate Armin Laschet and its bad defeat, the center-left SPD, the left-wing Greens and the center-right FDP hold preliminary talks during which they want to establish whether forming a three-way government coalition is feasible or not. On October 15th, the ‘traffic light parties’ say they want to go ahead and launch official coalition talks. One day earlier, on the 14th, the SPD’s Franziska Giffey announces she will form another coalition with the Greens and the far-left ‘Die Linke’ in the city state of Berlin.

In late October, Germany slides into the fourth Corona wave with far too many new infections per day. On October 22nd, there are 19,572 new cases.

In early November, the numbers literally explode. More than 37,000 new Corona infections are being registered on November 5th, 2021. In other countries, things are even worse. On November 3rd, Germany’s Air Force picks up twelve Corona patients from Romania. They are supposed to be treated at German hospitals. On November 8th, Germany’s Seven Day Incidence surpasses the 200 mark for the first time ever. On November 17th, some intensive care units in Germany’s south and east reach their limits, as more and more Corona patients are being admitted. Saxony puts in place nightly curfews on the 21st.

Because of extremely high infection numbers, Brandenburg’s Christmas markets need to close shortly after they open for the first time. In Berlin, the situation is somewhat better, which is why the capital’s Christmas markets remain open. On November 25th, as many as 75,961 new Corona infections are being reported in Germany. It is the all-time record.

On the same day, the ‘traffic light coalition’ is ready to go. It introduces an ambitious government program, less than two weeks before Olaf Scholz is supposed to be elected Chancellor at the Bundestag.

On December 7th, the traffic light parties sign their coalition agreement. The big moment arrives on December 8th. Germany has a new Chancellor. Olaf Scholz’ SPD was trailing behind in the polls for a long time. Just a year earlier, many Germans believed the SPD would not need a candidate for Chancellor at all because its numbers looked so bad. But everything changed. Scholz is a popular politician, and his main rival Armin Laschet was weak. These are two of the main aspects that led the SPD to its victory.

On December 12th, an American-made WWII bomb needs to be disarmed in Berlin’s Gesundbrunnen neighborhood. Some 15,000 residents need to be evacuated, along with the Jewish Hospital’s patients.

On December 16th, the new Foreign Minister Annalena Baerbock expels two Russian diplomats. The step is a reaction to a court verdict in the Tiergarten murder case. The culprit Vadim Krasikov, a Russian citizen who is believed to be part of the intelligence agency FSB, gets a life sentence for shooting the Georgian national Zelimkhan Khangoshvili, a former military commander, in Berlin’s Tiergarten park in broad daylight. The judge in charge of the case accuses the Russian state of being behind the assassination, and of “state terrorism”.

On December 21st, 2021, Franziska Giffey is elected Governing Mayor of Berlin. She succeeds Michael Müller, who did a good job, according to many Berliners. What he generally did not get enough of is respect. Franziska Giffey managed to overtake the Greens in the polls shortly before the elections in Berlin.

Note:
The first part of this Year in Review feature (January to June 2021) can be accessed here. This is the second part.