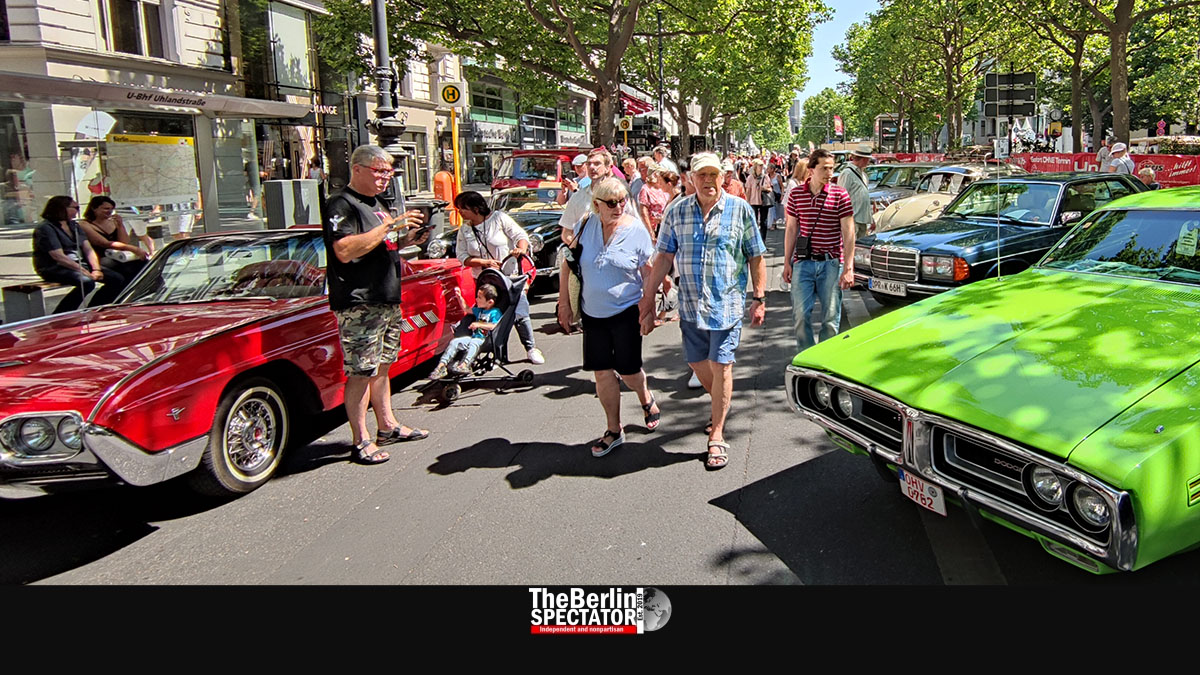 Countless classic car owners are showing off their treasures on Berlin’s Kurfürstendamm this weekend. Our reporter was among the thousands who went there to admire those vehicles on Saturday. E-Types and 911s, anyone? Quite a few American vintage vehicles can be seen there too.

Berlin, June 18th, 2022 (The Berlin Spectator) — After a long Corona break, Berlin’s Classic Days are back. Tonight until 10:00 p.m. and on Sunday, June 19th, 2022, from 10:00 a.m. to 8:00 p.m., the better part of Kurfürstendamm, a major boulevard in Berlin’s former Western city center, is reserved for vintage cars, their owners and spectators (yes, including The Berlin Spectator).

I’ve never seen this many 1980s Mercedes SLs, 1970s E-Types and 911s in my entire life. But more unique vehicles were exhibited too. Thousands of visitors came to stare at those beautiful cars. They shot a million selfies next to them and discussed their details with their owners. Many vintage car owners are used to gatherings like Classic Days. They come with camping tables, chairs and lots of food. An extra ration of fluid was required today due to the exaggerated temperatures. This was the hottest day in Berlin, so far, but tomorrow will supposedly be worse.

Beautiful 1950s and 60s Volkswagen Beetles were there, along with other models European streets were filled with 40 years ago. The most sensational cars even got awards. They included some that looked like horse-drawn carriages without horses. I liked many of the American vintage cars I ran into.

One Berliner came with the most elegant Ford LTD Brougham of all time. The car is in excellent condition. Forty years ago, its color, dark brown, was chic. The owner takes good care of this beauty. Another great example for American design present at the Classic Days is the 1980 AMC Pacer in red another Berliner exhibits there. No other car on Earth ever had this shape, and none never will. It is probably the most sexy means of transport in the city.

Then, I met Olaf Bannek. Just before Corona hit, he fulfilled himself a dream by purchasing a stunning 1957 Mercury Montclair from Arizona. “It was like buying a pig in a poke”, Bannek said. A friend of his sent him dozens of photos of the vehicle. He decided to go for it. A few weeks later, the went to the Port of Bremerhaven in his Dodge RAM and brought along a huge trailer. This was the day he was face to face with his Montclair for the first time. It is gorgeous, inside and out.

Between Olivaer Platz square and its with intersection Joachimstaler Strasse, ‘Kudamm’ is full of great vintage vehicles. Nobody wants to see an E-Type in British racing green parked next to a Datsun 280z, because the latter Japanese-made car is pretending to be a Jag. But you will if you go there. You will also see an Impala, several Ferrari 412BBs, but hardly any Lambos. There is a Lotus Seven 2. Several Rolls Royces are waiting too. It’s all there. Admission is free.