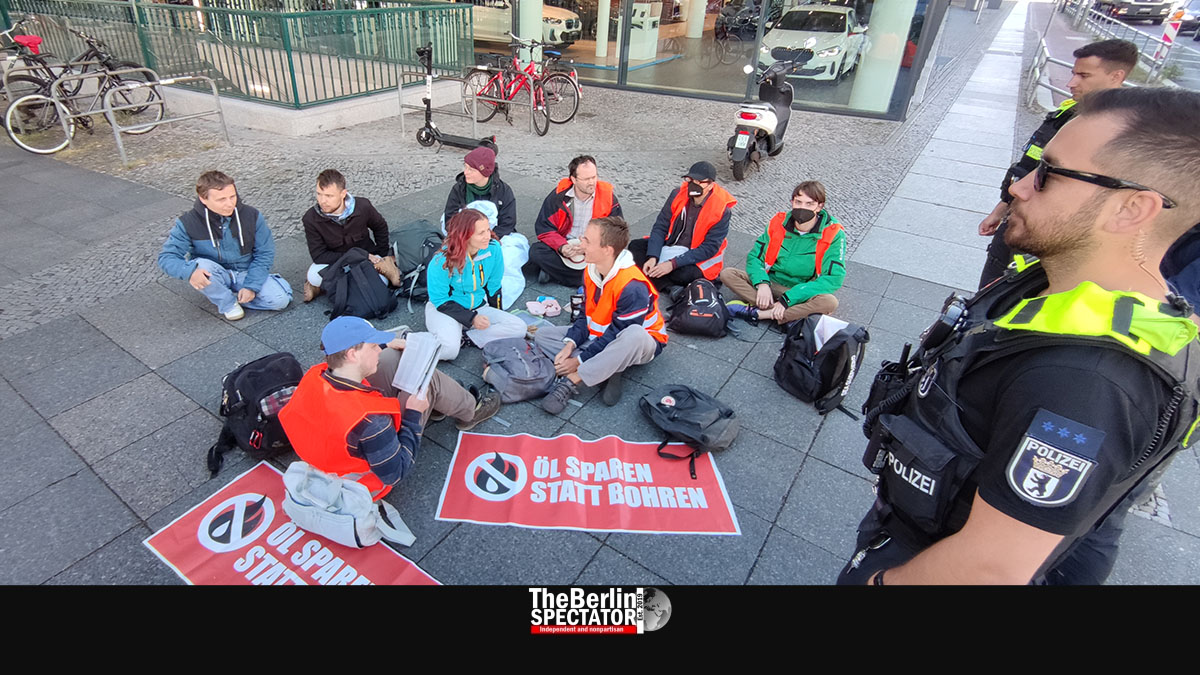 Radical environmentalists blocked several city highway exits in Berlin on Tuesday. Some of them glued themselves to the asphalt. Several traffic jams developed as a result. These protests are getting out of hand.

Berlin, June 21st, 2022 (The Berlin Spectator) — In the late morning, at 10:34 a.m., nine members of the radical environmentalist group Last Generation were being guarded by several police officers at the city Autobahn A100’s Kaiserdamm exit, which they had blocked before. They said they were waiting for the police to decide whether they would be detained or not.

A total of nine highway exits were blocked on three highways. Apart from Kaiserdamm, Hohenzollerndamm, Innsbrucker Platz, Messedamm Süd, Saarstrasse, Sachsendamm, Spandauer Damm and the Schöneberg junction were affected. The protesters at Kaiserdamm told The Berlin Spectator they had started today’s blockade at 8:00 a.m. on Tuesday.

It is not the first time. Yesterday, last Generation blocked several highway exists as well. The group’s motto is “Save oil instead of drilling! No North Sea oil!”. They have a demand: Chancellor Olaf Scholz is supposed to declare that Germany will refrain from drilling for oil in the North Sea. Weeks ago, at an earlier protest, they insisted on talking to Scholz.

In the past three years, a group called Extinction Rebellion annoyed many Berliners by blocking bridges and intersections. This movement wanted to “change the system” and demanded a more decisive climate policy. Like Extinction Rebellion, Last Generation claims to know what needs to be done, as opposed to the democratically elected government and everyone else. This is the group’s justification for the mess it creates on a regular basis.

In one of its statements, Last Generation said its “resistance” was peaceful. Apart from an end to the use of oil it wants public transport to be free of charge and a speed limit on the Autobahn. The latter demand is something more than half of all Germans support, according to recent polls. In Chancellor Scholz’s government coalition, the center-right Free Democrats (FDP) oppose this kind of step. During last year’s coalition talks, the Greens dropped their call for a speed limit even though it had been one of their central demands for decades.

Now, Least Generation says it is planning daily blockades on the streets of the capital “in order to make the government aware of our demands”. This causes more than one problem. First of all, hundreds of Berliners come to work late, others cannot take their children to school on time. The activists do not seem to care at all.

Secondly, the Berlin Police Department has many important tasks. Later this week, hundreds of officers from the German capital are scheduled to travel to Munich, to protect the upcoming G7 summit. It is unclear whether there will be enough policewomen and policemen to deal with radical activists who know things while everyone else does not.