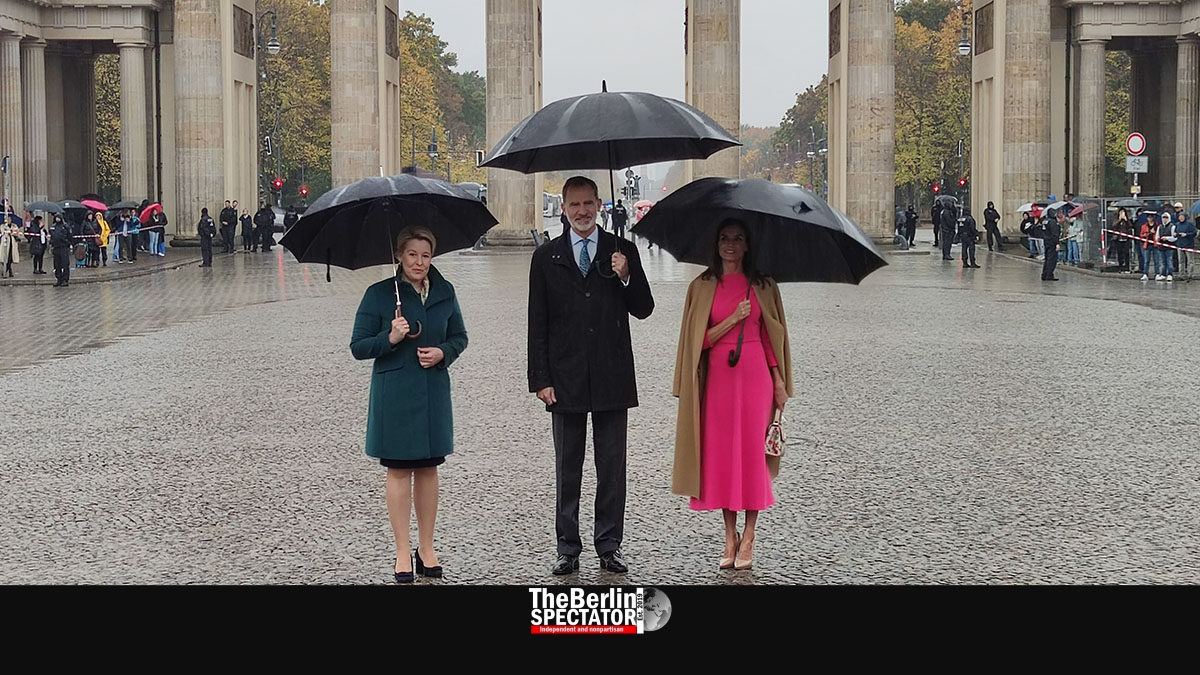 On Monday, Spain’s King Felipe VI and his wife, Queen Consort Letizia, arrived in Germany, where they are following a tight schedule. Today, they visited Brandenburg Gate with Governing Mayor Franziska Giffey, in terrible weather.

Berlin, October 18th, 2022 (The Berlin Spectator) — The opening of the Frankfurt Book Fair is the next event King Felipe and Letizia of Spain will attend, after a day in Berlin. This year, Spain is the main guest at the world’s largest trade fair for books. More than 300 exhibitors from Spain will be there. The Spanish authors Irene Vallejo and Antonio Muñoz Molina are scheduled to hold speeches at the opening event.

On Monday, the Spanish guests were welcomed by President Frank-Walter Steinmeier with military honors at Bellevue Palace. After a meeting with Chancellor Olaf Scholz at the chancellery, King Felipe VI and Letizia of Spain returned to Steinmeier’s residence for an official state dinner.

This morning, the royal couple took part in the German-Spanish Forum, where both the King and President Steinmeier held speeches. The Forum was founded 20 years ago, when the late former President Johannes Rau visited Madrid, and serves as an exchange platform between the two countries.

At Berlin’s Red City Hall, King Felipe and the Queen Consort refrained from signing the city’s Golden Book because they had already done so during their last visit, in 2014. Back then, they were welcomed by Governing Mayor Klaus Wowereit, one of Franziska Giffey’s predecessors. According to “diplomatic circles” in Madrid, members of which were quoted by the ‘El País’ daily, this visit has a big significance and “emphasizes the excellent dynamics of the bilateral relations”. Sentences do not get more diplomatic.

On Tuesday, it rained without interruption. King Felipe, Letizia of Spain and Franziska Giffey needed umbrellas in front of Red City Hall, when the Spaniards arrived 10 minutes apart. The King’s entourage included some 20 police motorcycles as well as both Spanish and German security agents. After a short visit, Mrs. Giffey took their guests to ‘La Puerta de Brandenburgo’ (Brandenburg Gate in Spanish). To everyone, including the reporters and photographers on site, this moment would have been more enjoyable without the rain. Some of the Spanish reporters who are accompanying the royal couple already were on the dry train to Frankfurt while everyone else got wet in Berlin.

King Felipe IV Felipe ascended the throne in 2014 upon the abdication of his father. Ten years earlier, in 2004, he married Letizia Ortiz who used to be a prominent TV news host. They have two daughters.