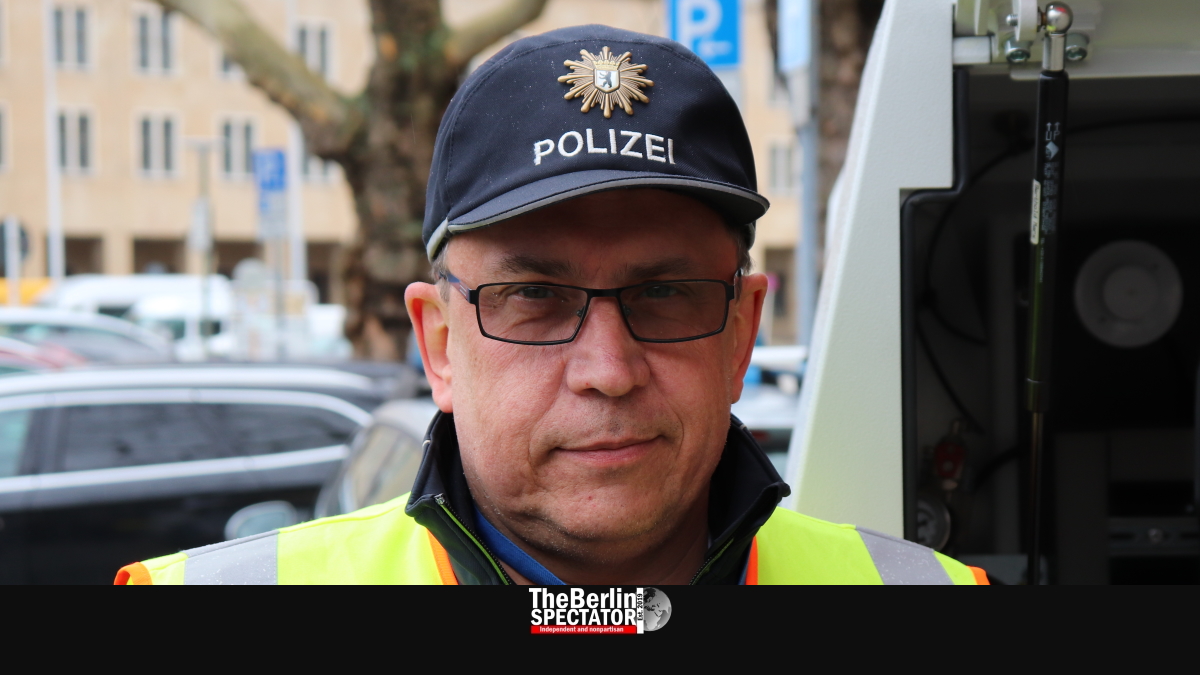 Berlin’s police officers face challenges every day. It is not easy to keep Berlin safe, to fight organized crime, to protect politicians and freedom of speech. Especially in Berlin the public perception of the police is important too. That is why it just got a new image campaign.

The Berlin Police Department deserves respect for what it does. It provides safety for first-graders and security for high-ranking politicians. It has to protect protesters from haters, and in some cases from themselves. Jewish schools and synagogues need to be guarded 24/7 because of wide-spread antisemitism.

But the Berlin Police Directorate also deals with traffic accidents, illegal parking, speeding and prevention. It fights theft, organized crime rings, the drug mafia and dog owners who let their four-legged friends shit on the street without cleaning up after them.

Not only does the Berlin police deserve respect, it also needs it. Criminals are more impertinent than ever, ignoramuses who call themselves ‘citizens of the Reich’ (‘Reichsbürger’) do not accept the Federal Republic of Germany or its police. Especially in times like these, irradiating authority in order to gain respect is more important than ever.

On top of it all, the Berlin Police Directorate needs new officers all the time. It trains them at its own police academy. Becoming a police man or police woman is a decision people would not take if they felt there was no respect for that profession.

A ‘Yes We Can’ Statement

This is the information age. What people read online and see on screens is important these days. For that reason even police departments need image campaigns. ‘Da für Dich’ (‘Here for you’) was the slogan of a campaign which was supposed to show especially young people, including those coming from countries in which police men terrorize people, that the Berlin Police is a friend rather than a foe.

Some months ago, Berlin police officers and immigrants recorded a rap video which became a statement against racism and similar forms of hatred. ‘Füreinander da’ (‘Here for Each Other’) was supposed to promote tolerance among young Berliners of all ethnicities.

The new image campaign entitled ‘Wir können Hauptstadt’ is some kind of a ‘Yes we can’ statement. There is no direct translation for the slogan, also because it is slang. If it really had to be translated, it would be something like ‘We know how to protect a capital’.

An impressive 40-second video is part of the new image campaign. The clip shows real officers in a boat on the Spree river, a police diver, other officers talking to residents, and some with machine guns. It resembles a trailer for a Hollywood movie and wants to convey the message that there is no challenge the police in the German capital will not master.

The statement the new campaign and the clip bring across is accurate. Now and then, a scandal might develop, such as the one involving an intoxicated police officer who caused an accident in which a young woman was killed. But all in all, Berlin’s police is doing a good job.

As opposed to its approach some decades ago, police keep on deescalating the situation at protests. For instance on May 1st of this year, hooded radical left-wingers wanted to turn the traditional Labor Day rally into a violent event. One officer kicked an arrested participant who was already lying on the floor, but all in all thousands of police women and police men prevented the protest from exploding by protecting the participants from themselves, using a smart strategy.

In 2016, the Berlin Police Directorate needed to deal with the first, and hopefully only, major Islamist terror attack in which 12 pedestrians were murdered at a Christmas market. As a result, the Islamism Department was increased in size.

On a regular basis, big raids against criminal Arab clans are being launched. Every time, this kind of action turns out to be a big endeavor. Recently, weapons smugglers were dealt a big blow.

Police Chief Barbara Slowik has applied changes since she took office. For instance, she wanted to strengthen the feeling of safety among residents by setting up new police stations at Alexanderplatz and other crime havens. At those spots, the number of criminal acts decreased as a result.

Berlin’s police has a total of 25,000 employees, including officers, colleagues in the administration and apprentices. Running an organization of this kind costs money. The price tag is 1.5 billion Euro per year (1.7 billion U.S. Dollars or 1.3 billion GBP).

The Police Directorate has six precincts and many departments, including one for large operations. There is a K9 department, the water police on the Spree river, a helicopter unit, a State Office of Criminal Investigations and the academy.

The new image campaign does not tell fairy tales, but gives people some insight into police work in the German capital. It shows what police in Berlin are actually doing every day. It is about an attractive profession. And about something Berlin’s police officers deserve: respect.