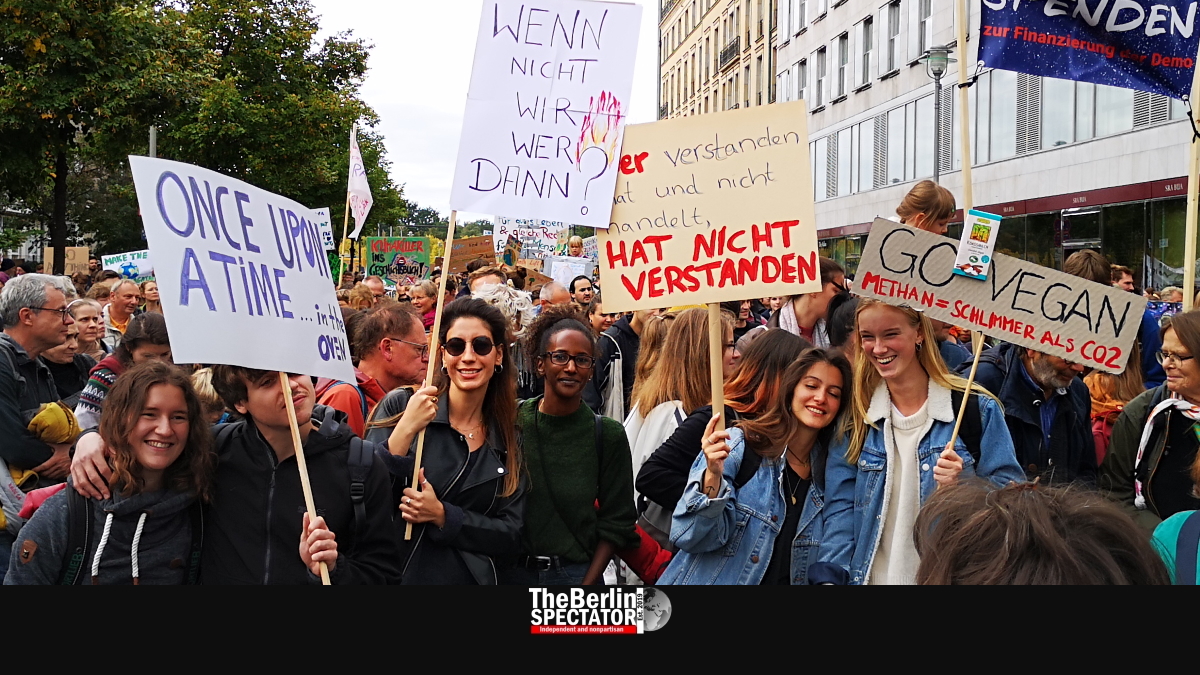 Update Sept. 21st, 2019, 3:45 p.m.: In Berlin, Hamburg, Frankfurt, Munich and hundreds of other German cities and towns, hundreds of thousands of protesters demanded bold steps for climate protection. The rallies in Germany were part of what was supposed to be the largest protest in the world.

According to Fridays for Future, an environmentalist student movement initiated by the Swedish activist Greta Thunberg, some 270,000 people gathered at Berlin’s Brandenburg Gate at around noon on Friday. Berlin’s police department counted close to 100,000 people. All generations were present. At one point it was so full hardly anyone at the stage set up in front of the Gate could move even an inch.

Mothers were carrying newborns, kindergarten groups showed up. Teachers appeared with primary school kids, and high school students went to the protest in groups. They were joined by the staff of many companies and countless other adults of all ages, including 80-year-olds.

While the German government passed a climate protection bill a few steps away, one of the Berlin organizers held a speech. It was cool everyone had come, the teenaged girl said. “We have to be here because the government screwed up on the climate.”

More and more protesters tried to get to the center of the action. In the meantime, police were busy getting the traffic out of the area. Many drivers had ignored the warning Berlin’s police had given to all Berliners. They were supposed to use public transport instead of cars on their way to the ‘Mitte’ district.

Several tourist buses from Spain and other countries got stuck too. The drivers left those huge vehicles in the middle of the street, while the tourists they were transporting joined guided walking tours for sightseeing purposes. Because of the huge protest, the usual selfie session in front of Brandenburg Gate was cancelled.

Further north-west, in Hamburg, police counted 70,000 participants who gathered at ‘Jungfernstieg’, located right in the city center, at the shore of the ‘Binnenalster’ lake. The organizers said 100,000 had participated. Down south in Munich, 25,000 protesters were part of their version of the rally.

Back in Berlin, the ‘S-Bahn’ city train bypassed the Brandenburg Gate station because the latter was overcrowded and it would have been dangerous to bring even more people to the platforms inside the station. More and more blocks around the Gate needed to be closed for traffic as protesters continued to coming in.

Radicals and their Plans

Their signs read “Alarm!”, “Act now or never!”, “Respect Mother Earth!”, or “F*ck each other, but not with Earth!”. In both Berlin and Hamburg, protesters blocked large intersections in the city centers. In Berlin, they did so at Potsdamer Platz, in Hamburg at ‘Stephansplatz’ and ‘Lombardsbrücke’.

In the meantime, the Berlin police was worried about radical organizations such as Extinction Rebellion. In particular, they hoped these protesters would not try to block Tegel Airport, which has only one access road.

In both Berlin and Hamburg, the local Offices for the Protection of the Constitution warned that radical left-wing organizations were using the protests in order to gain access to the mainstream. Before, the ‘Interventionist Left’ had vowed to “paralyze traffic” in Hamburg. ‘Avaaz’ is among the supporters of the Berlin rally. This organization supports the boycott movement against Israel, which is considered to be antisemitic.