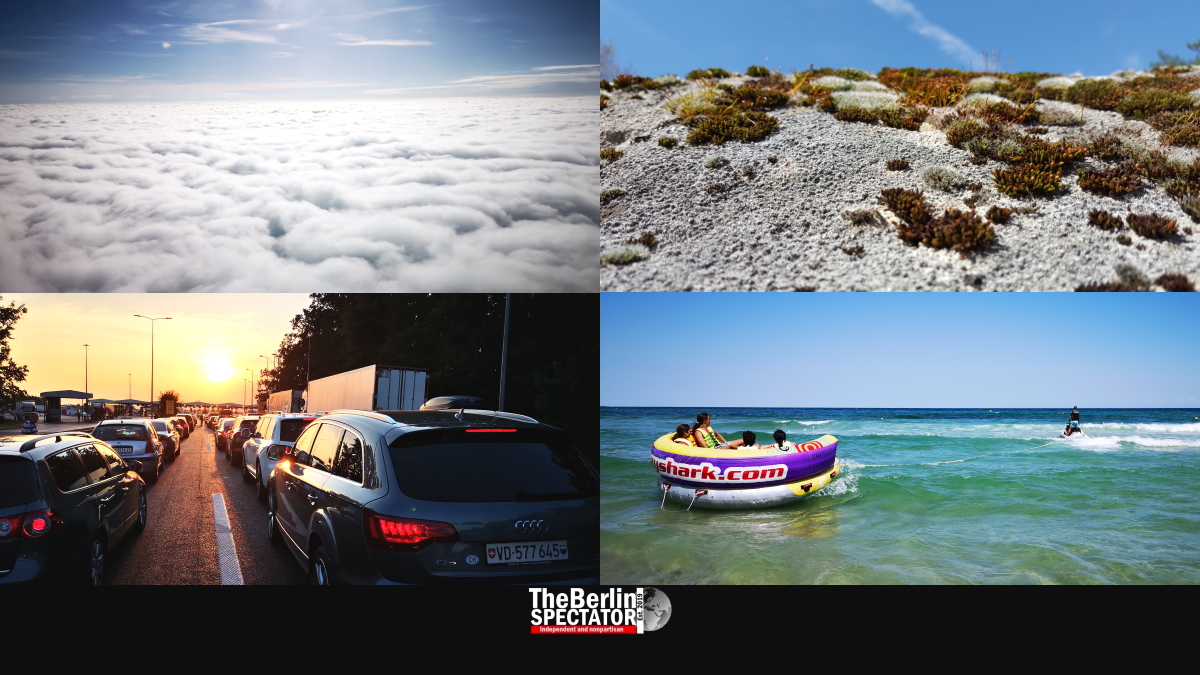 Many Germans and expatriates living in Germany are booking their summer holidays, now that the situation at many borders is about to change on June 15th, 2020. They have the choice between quite a few countries, including Germany itself.

Europe is opening up for vacationers from the continent. Thirty-two countries are part of something like a holiday agreement. They are all 27 European Union member states, the United Kingdom, Iceland, Liechtenstein, Norway and Switzerland. But the rules differ. For instance, Denmark and Greece have stricter rules than other countries.

From the perspective of Germany, most of the following countries can be visited from June 15th, 2020.

Germany offers great holiday opportunities, including interesting cities, the Black Forest, mountains all over the southern part of the country, lakes and beaches at the North Sea and the Baltic Sea, castles, camp grounds at nice sites and a lot more. It looks like many Germans might spend their holidays in their own country, meaning there will be a revival of domestic tourism.

Also, tourists from up to 31 countries will be choosing Germany as their travel destination, as many inner-European borders will be opening on or around June 15th, 2020.

On June 11th, 2020, Austria will reopen the borders to its neighboring countries, except for Italy, meaning moving back and forth between Austria and Germany, Liechtenstein, Switzerland, Slovenia, Hungary, Slovakia and Czechia will be easy. At some border crossings, travelers might have to wait in lines, just like before the crisis.

Austrian restaurants, hotels and museums are already open. Even cultural events are allowed again. Of course, the usual distance and hygiene rules apply.

In Belgium, restaurants and cafés will be allowed to reopen on Monday, June 8th, 2020. On June 15th, the country will be reopening its borders to tourists from neighboring Germany and other countries. Restrictions still apply what cultural events are concerned. Of course, there are distance and hygiene rules.

First it looked like Bulgaria had gotten through the first part of the Corona crisis better than anticipated. Hotels at the country’s Black Sea coast are already open to Bulgarian citizens. The season for tourists from abroad is supposed to commence on July 1st, 2020.

Then, on June 12th, the virus emergency situation in Bulgaria was prolonged until July 1st, 2020, because the number of new cases is increasing again.

E.U. citizens have been allowed to enter Bulgaria since May 22nd. Ryanair is offering flights from Berlin and other German cities to Sofia for June 27th and beyond. But the flight frequency is lower, meaning less flights are being offered.

Citizens from ten E.U. countries, including Austria and Germany, may enter Croatia. All they have to do is declare where they will be staying and leave their contact data.

Slovaks may enter Czechia without restrictions from June 11th, 2020. People from other E.U. countries such as Germany, Austria and Switzerland, have the right to do so from June 15th.

Denmark is about to reopen its borders for tourists from three countries, namely Germany, Iceland and Norway. This will happen on June 15th, 2020. But very strict rules apply. Visitors may not spend nights in Copenhagen and the capital may only be visited during the day.

What individuals from other countries are concerned, they have to wait until after the summer before they are allowed to enter Denmark. Anyone from Germany, Iceland or Norway who enters the country needs to prove they have bookings for accommodations, meaning hotels, holiday apartments or camp grounds, for at least six nights in a row.

France is scheduled to reopen its borders to travelers from Germany without restrictions on June 15th, 2020. In most of the country, hotels, camp grounds and other holiday accommodation places are already open. In Paris, this will be the case at the end of June. In the capital, restaurants will be allowed to welcome guests on their terraces and gardens or at tables on sidewalks and in pedestrian zones.

Museums elsewhere in France, and the country’s numerous beaches, are already open. The Louvre and other tourist attractions now use online reservation systems exclusively in order to avoid long waiting lines and big gatherings.

On June 15th, 2020, Greece will be reopening its borders to tourists from Germany and many other European countries. But visitors from France, Italy and the United Kingdom will have to wait longer. Citizens from those countries might be allowed to enter from July 1st. In Athens and Thessaloniki, the airports are scheduled to open on June 15th, while the other ones are supposed to be opened two weeks later.

The Greek authorities will be testing some incoming tourists for Corona infections. The individuals they pick are forced to wait for the results in their hotel rooms. Greece was not hit that hard by Corona. The country is trying to protect its citizens with these measures.

Beaches and most sightseeing spots in Greece have already reopened. The ferries to most islands are operational. Distance and hygiene rules apply everywhere in Greece, including on the ferries and at restaurants.

Germany intends to lift the general travel warning put in place in March for Iceland as well. The Icelanders will follow suit by allowing tourists to enter. But there are strict rules. Whoever enters will either have to go into quarantine or prove he or she is not infected with Corona by showing a document signed by a doctor.

Another alternative is to have a Corona test done upon entry into Iceland. Children are exempt. Tourists will be forced to install a Corona tracing app.

Even though it is one of the countries hardest hit by the Coronavirus, Italy was the first country to reopen its borders to citizens and holders of residence permits from the other 26 E.U. countries, including Germany, as well as Switzerland and the United Kingdom.

Strict Corona rules apply though. Tourists will be checked with temperature scanners everywhere. Distance and hygiene rules apply even at the beaches. Any holiday in Italy will be different from what it was before Corona.

Even though Austria has not officially opened its borders to Italy yet, tourists who go there by car will be allowed to pass as long as they have a booking confirmation to show.

The border between the Netherlands and Germany never closed during the Corona crisis, and they are open now. What tourism in concerned, most restrictions will fall on July 1st, 2020. This is when hotels, camp grounds and holiday parks are supposed to reopen for tourists. Restaurants and museums are already open. Just like everywhere else, distance and hygiene rules apply.

Holidays in Norway are an option for Danes, from June 15th, 2020. Citizens from other countries are not allowed to enter yet. Tourists who insist on going to Norway this summer will have to wait until August 20th. That is when the country intends to open its borders to other E.U. nationals. Norway is an exception.

Several months of closed borders are over. On Friday night, at midnight, Poland intends to reopen its borders to its E.U. neighbors Slovakia, Czechia and Germany.

While German citizens may enter mainland Portugal by air without restrictions, quarantines of 14 days are mandatory in Madeira and other islands. But Portugal’s hotels will not open until mid-July. Getting there by car is not possible until July 1st because of Spain’s strict rules.

Slovenia reopened its borders two weeks ago. Tourists need a booking confirmation, but they do not need to go into quarantine. Driving through Slovenia, for instance on the way to Croatia, is allowed as well. Hotels are open. Strict rules apply at the small country’s Adriatic beaches.

Spain’s borders will reopen one week later than most others, namely on June 21st, 2020. On the same day, the quarantine rules for entering individuals are supposed to be scrapped.

Once Spain reopens its borders, Germany intends to lift the general travel warning for this country. Spain was hit hard during the crisis.

E.U. citizens and holders of residence permits from member countries may enter Sweden. But going there by car from Denmark was not allowed to most Europeans. A new policy announcement in Copenhagen is pending.

Caution is advised. During the crisis, the Corona rules in Sweden were not strict at all. Now the virus is spreading more than in other European countries. The German government announced, it would monitor the situation closely.

While important cultural, including the Montreux Jazz Festival, were cancelled, spending the upcoming summer vacation in Switzerland is not a problem. The borders are scheduled to open on June 15th, 2020. Hotels and restaurants are open. Of course, Corona rules do apply.

Tickets for ropeways in the Alps and other means of transport, including trains, should be purchased online since the number of passengers is limited due to the distance rule.

From June 15th, Germans and citizens from other E.U. countries may enter the United Kingdom, but they will have to go into quarantine for two weeks. The same applies to anyone who enters the country, no matter what nationality the individual has. Only people coming in from Ireland are exempt.

Citizens and holders of residence permits from a total of 32 countries, namely the 27 European Union members states, Iceland, Liechtenstein, Norway, the United Kingdom and Switzerland, will be allowed to enter Germany. According to Germany’s Foreign Minister Heiko Maas, the “principle of mutuality” applies, meaning citizens from the countries Germans may enter have the right to travel to Germany.

You want to travel to a country not listed here? Please contact one of its consulates. Since the rules change all the time, please inquire about the latest ones in the cases of the countries mentioned above as well.