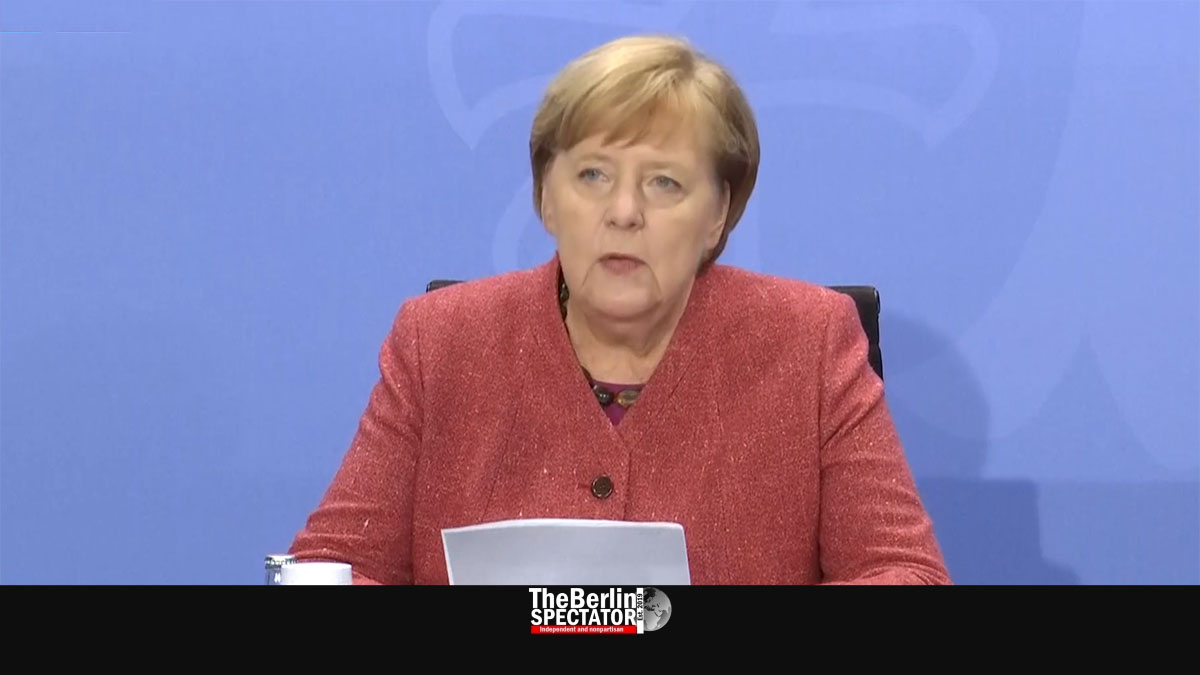 In Berlin, Angela Merkel was hoping for an agreement with the First Ministers on stricter Corona rules. But some of the federal states did not support the approach, which is why decisions are supposed to be taken next week.

Berlin, November 16th, 2020, (The Berlin Spectator) — After five hours of deliberations with the First Ministers of Germany’s sixteen federal states, Chancellor Merkel informed the press in Berlin. She said, what the dynamic of the ongoing Corona wave had been broken, but there was no trend reversal yet. It was important to get the Seven Day Incidence Number down to 50, Mrs. Merkel stated. That way the local health authorities could trace back each infection to the source. The Chancellor conceded that Germany was still far away from that level.

Germany’s head of government thanked the nation for following the rules. She said this Corona wave’s exponential growth had been slowed down. Contact restrictions were the formula for success.

But Angela Merkel said she and the First Ministers had agreed that the goal had not been reached yet. She announced another meeting for next week, on November 25th. Initially, November 23rd had been the date for the government’s next Corona discussions. On Wednesday of next week, not only the rules for the rest of November would be talked about, but also the time until next year. There needed to be predictability for Christmas and into 2021, the Chancellor stated.

Next Meeting Next Week

She explained her government was looking at several indicators, including the number of new infections, the Seven Day Incidence Number, the Reproduction Number and the doubling time. It was imperative to watch the occupancy of Germany’s intensive care beds too, and to act before the ICUs filled up.

Chancellor Angela Merkel had wanted to adjust the Corona rules today, but conceded a majority of the federal states had not wanted to do so yet. On Wednesday of next week, decisions would be taken, she announced.

Mrs. Merkel also talked about persons with respiratory diseases or cold symptoms who are not infected with Corona. She explained that they could not be distinguished from Corona patients and needed to contact their doctor who would decide whether a quarantine was necessary. The doctors would also decide whether a Corona test needed to be taken.

The nation was also reminded of the rules that are in place for the rest of the month or until further notice. Angela Merkel said everyone needed to refrain from having contacts that were not necessary and from celebrating private parties. Persons or families who really wanted to see relatives should limit those contacts to one household, the Chancellor said.

Unnecessary day trips and tourism needed to be avoided, Mrs. Merkel stated. The same applied to trips by public transport. Elderly people should only be visited without symptoms, and exclusively by persons who had not taken any risks with contacts beforehand. In December, the federal government will provide so-called FPP2 masks to members of risk groups for low prices.

Finally, Angela Merkel also talked about vaccines that might be available soon. She mentioned the latest announcement by the company Moderna according to which it is working on a Corona vaccine with a success rate of 95 percent. This was a good sign, the Chancellor said. A vaccine might be available rather soon, Merkel believes. But for now the next Corona meeting needed to be prepared, she stated.

At the same press conference, Berlin’s Governing Mayor Michael Müller, who is also chairman of the Conference of First Ministers, said a lot had been achieved, but not nearly enough. The situation continued to be worrisome. An overall plan for the winter would be announced after the meeting next week, Müller said.

His Bavarian colleague Markus Söder said the efforts taken were not just about a stagnation in regard to the new Corona infection numbers, but rather about getting the Seven Day Incidence Number down to 50. The problem right now was the fact that “we do not know where the infections are coming from”. Fighting for each life was the most important task. Söder also said he did not believe everything would be fine by the end of November.