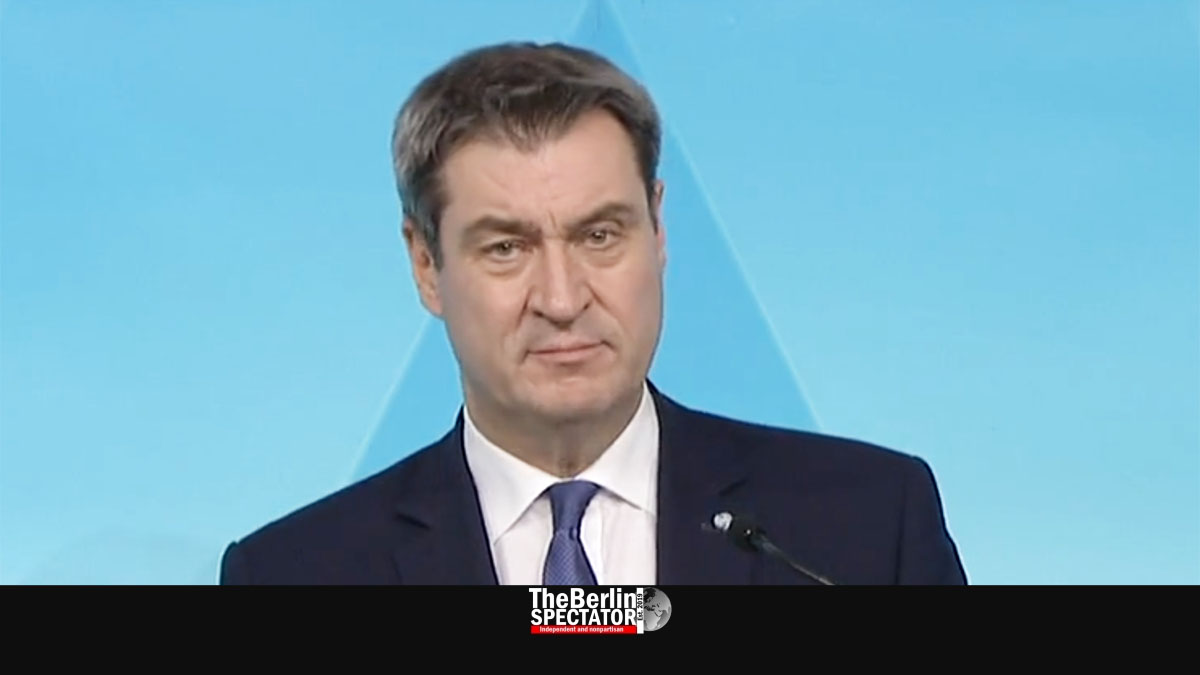 After a cabinet meeting in Munich, Bavaria’s First Minister Markus Söder announced a list of new Corona rules that will be put in place because the infection numbers remain high. The state parliament is supposed to approve the measures on Tuesday.

Berlin, December 6th, 2020 (The Berlin Spectator) — Markus Söder wants the state parliament in Munich to approve a new list of anti-Corona measures on Tuesday because the number of infections in Bavaria still does not drop. He also said he believed another conference of First Ministers needs to take place for a discussion about the circumstances in all of Germany.

According to the decisions taken, Bavaria will declare a disaster situation. That way, controlling the hospitals would be easier, Söder stated. He announced further restrictions on outdoor activities. Just like in spring, when Corona hit for the first time, people will be allowed to leave their homes for good reasons only. Those include getting medication, going to the doctor, shopping or dealing with family issues.

In regions with Seven Day Incidence Numbers on levels higher than 200, curfews between 9:00 p.m. and 5:00 a.m. will be in place, in addition, if the Bavarian state parliament agrees. The eased contact restrictions that were supposed to be valid for Christmas and New Year’s Eve will apply for Christmas only, from December 23rd to 26th, 2020. This means, Bavaria will let up to 5 people gather on New Year’s Eve, just like the city state of Berlin. Ten persons may get together for Christmas. Children up to 14 years of age do not count.

Vocational colleges in Bavaria are supposed to switch to online learning starting on Wednesday. At secondary schools, grades 8 to 11 will be switching back and forth between classes on site and online classes. But graduating classes will be learning at school every day. Markus Söder said, 550,000 students would be affected by the tightened rules.

Retail businesses will remain open, but shops will have to expect more checks by police or other authorities. They are supposed to adhere to the rules regarding the amount of space they need to allocate to each customer. That way shops are required to make sure they are not too full.

Consuming alcohol in public areas will be forbidden in Bavaria.

The federal state shares international borders with Austria and Czechia. Crossing them without restrictions will be allowed to commuters and persons whose family members live in the other country. Other individuals either have to go into quarantine when they enter Bavaria from abroad, or show a negative Corona test.

Visits at homes for the elderly or for persons with challenges are supposed to be limited to one per person and day. The visitors are supposed to show a negative Corona test and wear ‘FFP2’ masks of high quality. Caretakers will have to get tested twice a week.

Soldiers and Police Officers to Help

On top of all of the above, local health authorities will receive uniform software programs in order to make sure they can communicate and report Corona cases properly. Soldiers and the police will help tracking down the contact persons of individuals who are infected with Corona. Also the Munich government is asking all employers to let their staff work from home if possible.

First Minister Söder rejected criticism according to which the restrictions endanger the economy. The opposite was the case. Short-term monetary advantages were not as important as real successes in the fight against Corona. Neglecting health meant neglecting the economy, Söder stated.

The First Minister also said the nonchalance with which some people in Germany talked about Corona-related deaths bothered him. In the past two weeks, their number increased substantially.