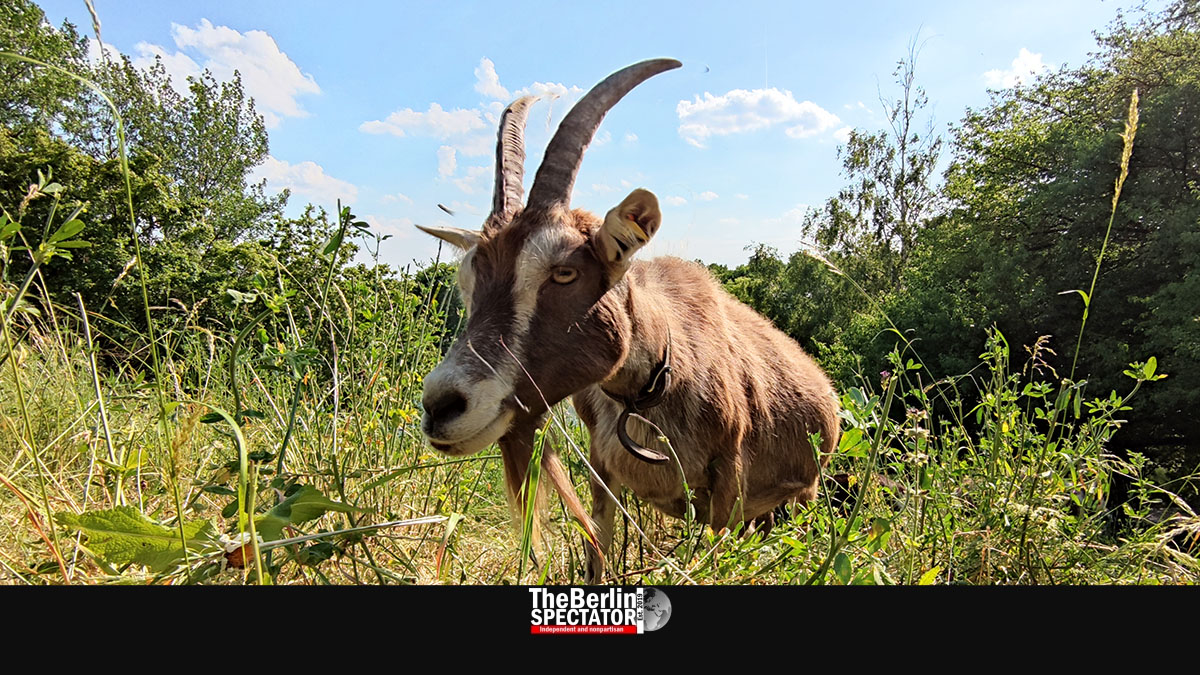 If goats and sheep had Facebook accounts, they would definitely give ‘likes’ to all posts about Britzer Garten park in Berlin. The grass they consume there does look good indeed. So does everything else.

Nijmegen/Berlin, June 14th, 2021 (The Berlin Spectator) — How many parks you know have a port for remote-controlled model boats? Welcome to Britzer Garten, one of the greenest and nicest spots in Berlin. It is one of the few parks tickets need to be purchased for. But what it offers is worth every cent. So, you do not believe me? Ask the goats and sheep that live there. Their mission, if they choose to accept it, is to eat all the grass they find. But they are not allowed to consume those beautiful flowers.

But we are getting ahead of ourselves here. Let’s go back to the year 1791. Back then, the Spanish botanist Vicente Cervantes sent dahlia deeds from Mexico City to Madrid. Soon, these stunningly beautiful flowers, which can actually change their colors, spread all over the old continent. Guess where vivid samples can be admired. In a feature about Britzer Garten, finding the answer is not too difficult. The bad news? It will take until the end of August until the dahlia, some 7,000 of them, will appear.

Let’s go back even further, to 1637. That year, the tulipomania ended in a major stock market crash, the first one in history. It did not change the beauty of the tulips Dutch floriculturists grow, or the ones at Britzer Garten. At the latter Berlin park, tiny wild tulips and cultured large ones mesmerize visitors. Here, as many as a quarter million tulip bulbs were planted. Hey! Remember to keep those goats away from the tulips! Guess what: Tulips and dahlia are not the only kinds of flowers Britzer Park proudly presents.

This beautiful park is located in Britz, a neighborhood in Berlin’s Neukölln district in the south. A visit there requires purchasing tickets first. During the warm season, regular ones are 3 Euro, kids older than 5 years of age pay 1.50 Euro. So do seniors and handicapped persons. From November 1st until February 28th, the admission price decreases. In winter, visitors will be asking themselves a question Pete Seeger came up with in the 1970s: “Where have all the flowers gone?” But they will still be able to take nice walks in the quietude of Britzer Garten.

Around the park’s lakes, people engage in sports activities including jogging and yoga. From the perspective of kids, the water playground is one of the highlights in spring and summer. There also is a ‘Kneipp cure health parcours’. The giant meadows the park features are the perfect place for little picnics or just relaxing on blankets. Those who feel they need to be active can walk around a whole lot. Britzer Garten is huge. The little train which used to take those who were sick and tired of walking to five stations all over the park is out of service. On the park’s website it says this had to do with Corona, but at those five train stations signs say the tracks had been damaged by the summer heat.

Those who insist on walking like crazy will meet those goats and sheep on pastures they are supposed to take care of. It is easy to get lost in those little gardens that feature beautiful flowers of many kinds. Some almost feel like jungles, the kind Indiana Jones would conquer. Relaxing on recliners provided on those meadows is a good idea after following the main path for 5 kilometers (3 miles). And no, bicycles are not allowed at Britzer Park. By the way: Nobody will starve at the location. There are several cafés that offer snacks and beverages.

It all started in the mid-1980s. A huge area of fields and little garden plots was converted into a world of flowers for the 1985 Federal Garden Show West Berlin was so proud of. Shortly before the fall of the Berlin Wall, on July 8th, 1989, Britzer Garten was inaugurated. Visits usually take several hours because of the size of this place.

There is no time like the future. Britzer Garten will change. A project called ‘Britzer Garten 2030’ is in the works. New sports activities are supposed to be offered, and the big lake will become “more interesting” with “sports and education offers”. Many more changes are in the pipeline. But, even today, this is a great place.

We have a request: The Berlin Spectator has been online for 28 months. We deliver the most relevant news from Germany along with features about Berlin, culture, people, tourist magnets and other subjects, and we garnish the whole thing with entertainment and other extras. The Berlin Spectator thanks the thousands of readers we have every day.
But we also need support. Would you consider supporting The Berlin Spectator? You can do so directly via Paypal or you can go to our Donation Page first. Thank you so much.