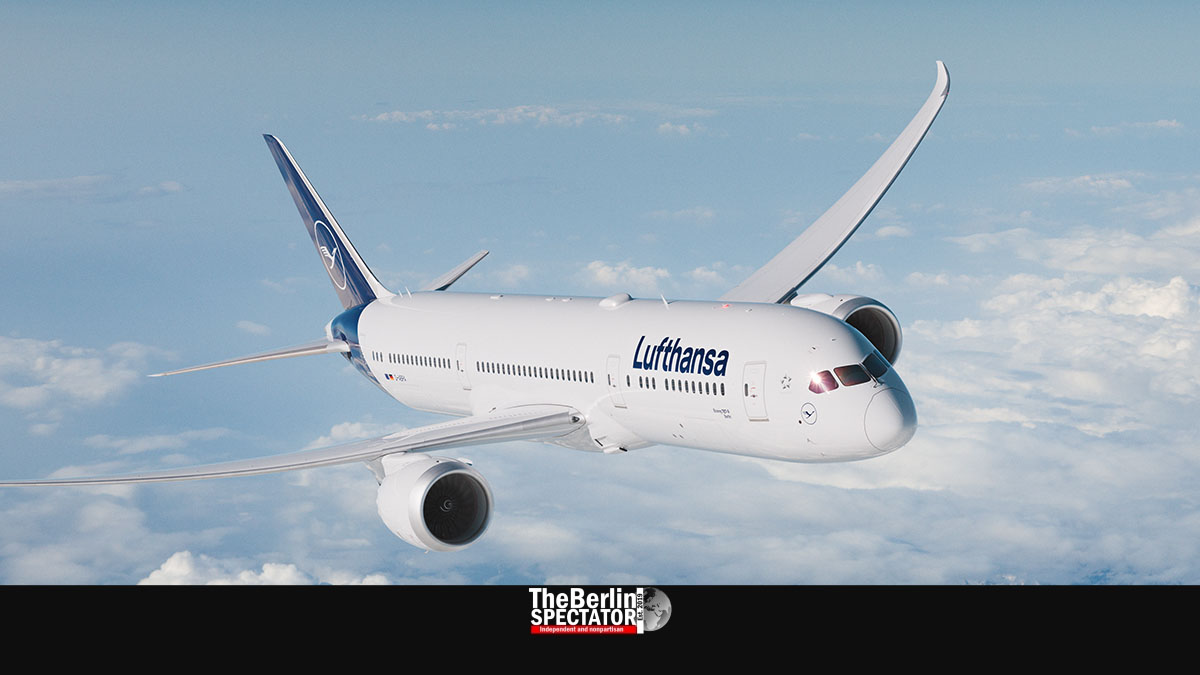 Lufthansa is expecting important deliveries. In 2022, the airline is supposed to get its first five Boeing 787-9s. The very first one will be named after the German capital, the city of cities.

Berlin, October 21st, 2021 (The Berlin Spectator) — Recently, Lufthansa mothballed its giant Airbus A380 at Teruel Airport in Spain. All fourteen of them were flown over, parked and sealed. They might never be flown again, at least not by Lufthansa. Corona caused a big aviation crisis which got so bad the German government needed to bail out the company with an aid package worth 9 billion Euro (10.47 billion U.S. Dollars or 7.61 billion Pounds Sterling).

Because of travel bans, lockdowns and the danger of infection during trips, the passenger numbers temporarily decreased by 99 percent. By now, things look a bit better, but it will take years until the ‘good old times’ will return, if they do at all.

Corona is not the only problem the airline industry is facing. There is another huge one called climate change. People are more aware of their CO2 footprint, also when they travel. On top of it all, airlines like Lufthansa need to save money. In the long distance aircraft segment, two interesting products are on the market. Both will help save both CO2 emissions and money. They are the Airbus A350 and the Boeing 787. Both of these twin-jet engine models consume about 30 percent less kerosene than conventional long distance planes.

Five Boeing 787-9s, also known as Dreamliners, will be delivered in 2022. Lufthansa pilots will probably pick them up at Boeing’s factory in Everett (Washington state). The first one of them is supposed to have the call sign D-ABPA and the name of a city it might never fly to, of maybe just once, for its baptism ceremony, namely ‘Berlin’. Lufthansa’s Dreamliners will be seen at Frankfurt Airport and Franz Josef Strauss Airport near Munich. Those are the German airline’s main hubs for intercontinental flights. Still, the D-ABPA will be honoring Germany’s capital, its most vivid city, Berlin. What other name were they supposed to choose for a sleek and sexy aircraft like this one? Bielefeld? It had to be Berlin.

Lufthansa’s first ‘Berlin’ was a Boeing 707 that was used in the 1960s and early 70s. The second one was one of the giant A380s that were parked in Teruel, because the parking lot down there is a lot cheaper than the one in Frankfurt. Besides, the southern climate will not damage the plane quite as quickly as German weather would.

Soon, the D-ABPA, an aircraft which needs only 2.5 liters of kerosene per passenger and 100 kilometers of flying, will be inheriting the big name. Of course, the new ‘Berlin’ already has its first destination, even before it was built. It will be Toronto. Have a good flight.