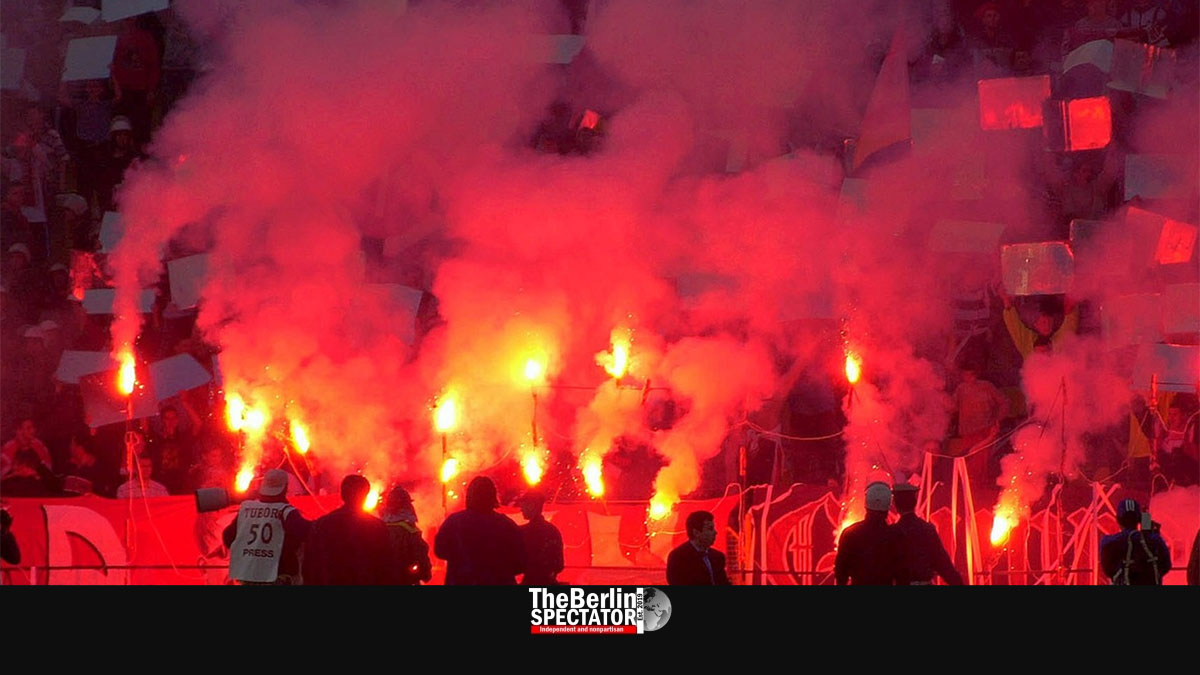 Since Wednesday, police in berlin have been doing their best to control a mob of German and Dutch soccer fans who obviously wanted violence. Dozens of them missed the match because they were put behind bars before it commenced.

Berlin, November 5th, 2021 (The Berlin Spectator) — On Thursday night, a major storm and constant rain turned Berlin into a mess. There were big puddles all over the streets, also because falling leaves had clogged up the German capital’s drainage system. Strong winds capsized signs and any objects that were not heavy enough to withstand them. Forecasters had predicted there would be more rain in one day than there usually was in a year.

In this bad weather, countless police vans with up to nine officers each raced through the city center before, during and after a soccer match at Berlin’s Olympic Stadium. Here, the team Union Berlin played Feyenoord Rotterdam. A day before the match began, Dutch fans, many of whom turned out to be hooligans, arrived. It was obvious they wanted to provoke violent incidents. Two of them were arrested after they sprayed the name of their soccer team onto one of the last pieces of the Berlin Wall at the Eastside Gallery.

Since they damaged an object which is under monument protection and covered a piece of art with their scribbling, they committed a felony. Many more hooligans from both the Netherlands and Germany obviously wanted violence more than soccer. Hundreds of police officers who were on duty a day before the match, on Wednesday, confiscated several objects, including brass knuckles and pyrotechnical products.

The Berlin authorities expected violence, also because many incidents had occurred when the first match between these two teams had taken place in the Netherlands. This is why the number of police officers on duty was increased to 2,000 on Thursday. Usually, this is the number needed for violent protests. For hours and hours, the police tried to separate the hooligans. While those who had come to Berlin from Rotterdam and elsewhere in the Netherlands had to go to the stadium by ‘U-Bahn’, the German version of metros, subways, undergrounds or tubes, the native fans had to hop on the ‘S-Bahn’ city train.

Before the match, hundreds of mostly intoxicated Dutch fans gathered at several points in Berlin’s city center, including Hackescher Markt. It did not take long until the managers of restaurants there called the police because too many people were trying to squeeze into their businesses in what they called an aggressive atmosphere. At two other locations, dozens of fans from both sides assembled. When they seemed to be planning a scuffle, the Berlin Police Department did what it could to stop them.

Drunk hooligans attacked police offers on more than one occasion, by throwing empty bottles and other objects at them. At least 58 Dutch hooligans and 13 German ones did not get to see the match, but spent the night behind bars instead. According to the police, hooligans from Poland and parts of eastern Germany came to Berlin as well in order to be part of the expected violence.