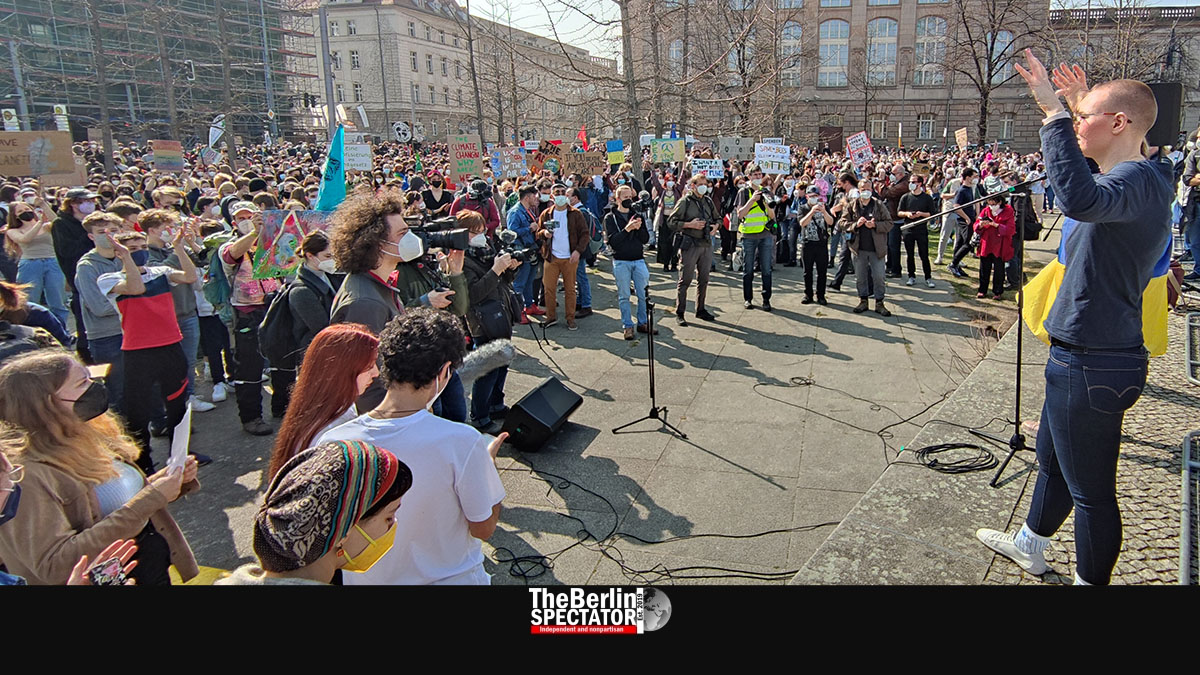 Another ‘Global Climate Strike’ was staged by the Fridays for Future movement today. In Berlin alone, 22,000 people took part, according to the organizers. The rally’s motto was #PeopleNotProfit.

Berlin, March 25th, 2022 (The Berlin Spectator) — “Everyone for climate justice and peace”, a large banner carried by about twenty-five pupils read. They were leading today’s rally from Berlin’s Invalidenpark to Brandenburg Gate. For this latest ‘Global Climate Strike’, 10,000 participants were registered, but the organizers said 22,000 had shown up. Indeed, it was a huge crowd that gathered at Invalidenpark, located close to Berlin Central Station.

This rally was somewhat different because of the war in Ukraine. Yes, Fridays for Future still called for a more radical climate policy, but also for peace. “Today, we are siding with the people anywhere in the world who are suffering because of wars and the climate crisis”, a statement by the group read. “We have to get away from policies that give profits for corporations a higher priority than necessities of life for people.”

“Everything goes down except for the temperatures”, a sign held by girl read. “Solidarity with Ukraine, no more natural gas, coal or oil from Putin”, another one said. One schoolkid held a sign that read “I want a hot date, not a hot planet”. A teenaged boy brought a sign that said “The climate is changing. Why aren’t we?” As always, a speaker, who also was a teenager, said it was “so cool” and “unbelievable” that so many people had joined the demonstration. “What do we want?”, she asked. The crowd answered “Peace and justice!”.

A Ukrainian schoolgirl who has been living in Germany for three years spoke to the participants. She called for an end to oil and gas imports from Russia. She said Moscow was using Germany to fund its war. “No deals with Russia!”, she demanded. Then, two students from Russia, Arshak and Polina, stood in front of the thousands of protesters. Both of them have been peace activists in Russia, under difficult conditions, for a long time.

“I don’t remember how often I was arrested in the past six years”, Arshak said. Polina stated she had been persecuted as well. “Russian activism is scary and devastating”, according to Arshak. People were being “killed and tortured for anti-war activism”. The two young Russians demanded an end to all energy imports from Russia as well and addressed Vladimir Putin in Russian.

The Fridays for Future protest in Berlin was just one of 300 worldwide, and dozens in cities all over Germany. From Konstanz in the south to Flensburg in the country’s very north, and from Kleve in the very west to Frankfurt (Oder) in the east, schoolkids staged protests all over the place. They also did so in Sydney, Cape Town, Brussel and Seoul.