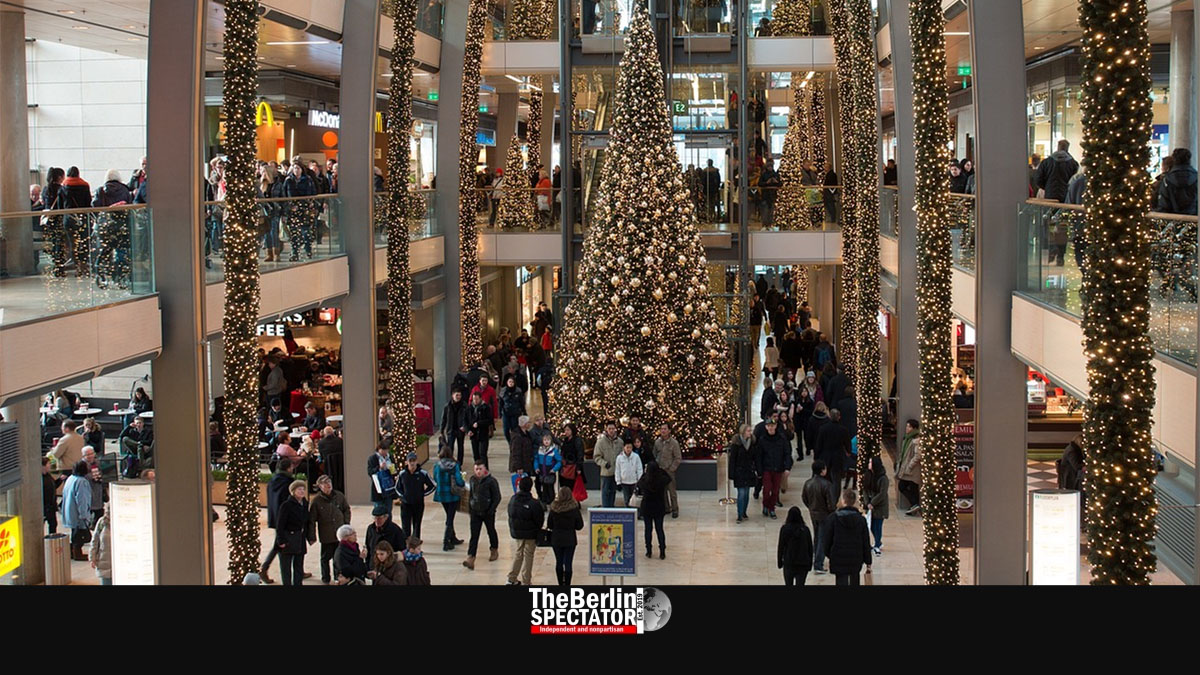 In Berlin, Christmas shoppers are preparing to max out their credit cards today. This is one of the two Sundays before Christmas on which many major stores are open for business.

Berlin, December 4th, 2022 (The Berlin Spectator) — On most Sundays, shopping in Germany is rather frustrating. Those who try will stand in front of closed doors. The only advantage is the fact that finding a parking spot in front of major malls is easy. But why would anyone park at a closed mall? Tiny convenience stores and gas stations do open on Sundays. So do cultural venues, restaurants and churches. In large cities like Berlin, ‘emergency supermarkets‘ do open. But that’s about it.

This is an exception. Today, on December 4th, 2022, and on Sunday, December 18th, major shops in Berlin do open, mostly between 1:00 and 6:00 p.m.. Those who really want this nice armchair they saw in the Ikea catalogue can visit one of the Ikea stores in Tempelhof, Lichtenberg or Spandau to get it. Or how about this nice SLR camera? Do you still want to purchase it for your spouse? Some Saturn and Media Markt stores will be opening as well.

So will major malls and department stores in Berlin, including Mall of Berlin, Kaufhof at Alexanderplatz, KaDeWe (Kaufhaus des Westens) in Charlottenburg, Alexa in Mitte, the East Side Mall in Friedrichshain, Boulevard Berlin in Schöneberg, Eastgate in Marzahn, Wilmersdorfer Arcaden and others. Many small shops in Berlin’s two city centers are expected to open too.

This year’s Christmas shopping experience is very different from what it was in the past two years, when protective masks and restricted access kept people from shopping in the real world. Many of them did so online instead. After almost three years of Corona, retailers in Berlin and the rest of Germany are hoping for good business today, the second Advent, and on December 18th, which is the fourth Advent.

Germany’s laws are strict. There is no shopping on Sundays, unless there are events that will attract more shoppers than there would have been otherwise. Wouldn’t ‘Sunday shopping’ itself be such an event? Apparently not. In this case, Berlin’s many Christmas markets are attracting people. Earlier this year, Germany’s Federal Administrative Court ruled in favor of the city state of Berlin and against the Verdi Union which opposed ‘Sunday shopping’ in the German capital.

For those who want to be engaged in the activity of the day, combining Christmas market visits and shopping sprees is probably a good idea. So is leaving the Jaguar in the garage and going by bike or public transport. Berlin’s city centers will definitely be crammed in the afternoon, and the streets will likely be congested.