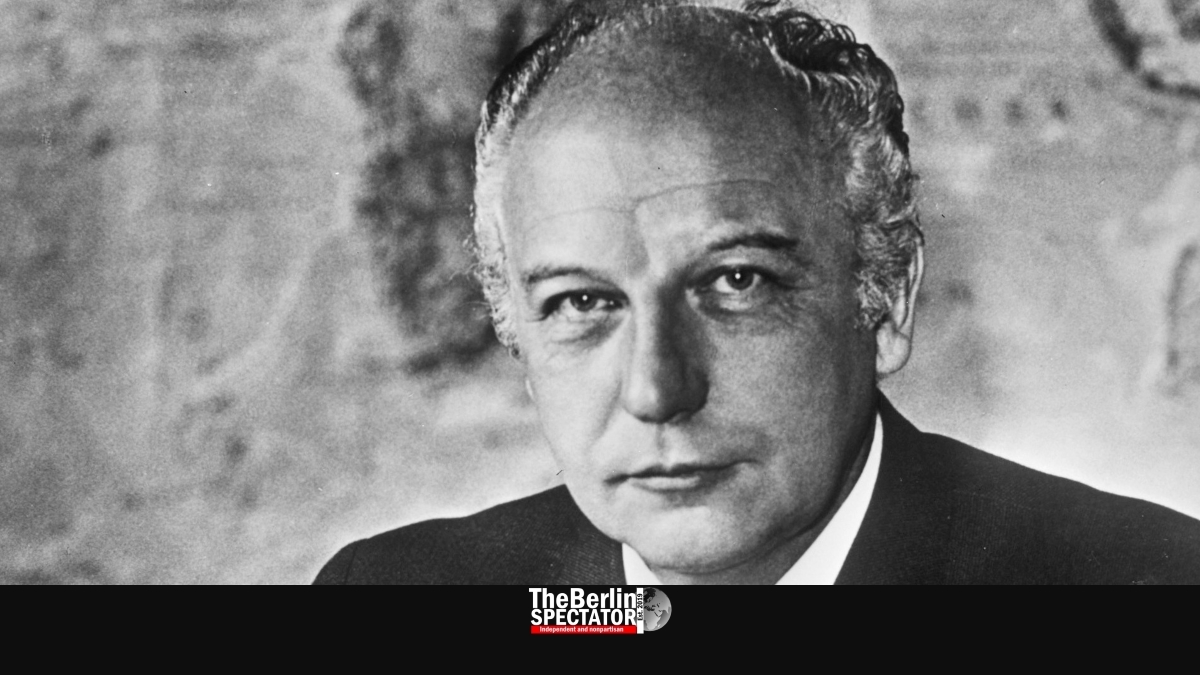 If there was anyone who held several of the most important positions available in Germany, including President and Vice Chancellor, and who helped shape the young Federal Republic, it was Walter Scheel. Without him, the policy of détente towards the Soviet Bloc would not have been implemented.

As chairman of the liberal-conservative FDP, he managed to convince his party friends to agree to a government coalition with the center-left SPD in 1969. For a few days, he even was Acting Chancellor. And he boosted his popularity substantially by singing and recording a German folk song.

A hundred years ago, to the day, on July 8th, 1919, Walter Scheel was born in Solingen. His father was a wheelwright. While the Nazis already ruled Germany, he started an apprenticeship at a bank. Then he joined the Luftwaffe in 1939, where he was promoted and given medals.

Decades later, a controversy surrounded Walter Scheel. He kept on saying he had never applied to become a member of the Nazi party NSDAP. In 1978, he reportedly said he did not remember whether he had applied. Once he was President, he conceded he had indeed been a member.

But in the Federal Republic of Germany, Scheel was never suspected of not being a democrat. The opposite is the case: He was one of the staunchest advocates of democracy and freedom. Still, the NSDAP membership left a negative connotation.

The latter also applies to one more aspect: In 1970, Foreign Minister Walter Scheel announced a study about the history of the German Foreign Ministry during the Third Reich. But that study was not written until 40 years later, when it was ordered by one of his successors.

After the war, Scheel got jobs in the industry, as CEO of several companies, before founding businesses himself. In 1964, he sold his part of a company he had established, making good money. Eighteen years earlier, he had already become a member of the FDP. For a long time, he was part of the party’s board in the federal state of North Rhine-Westphalia.

Under the first Chancellor of the Federal Republic of Germany, Konrad Adenauer, a Christian Democrat, Scheel became Minister of Economic Cooperation and Development. In late 1962, he stepped down in protest, because of the ‘Spiegel Affair’, a scandal caused by the ultra-conservative Minister of Defense Franz Josef Strauß (Strauss). But once Strauß was sent back to Bavaria, Scheel continued as minister until 1966.

It was in 1969 when Walter Scheel made history. Obviously, it took him some effort to convince his party to change horses in 1969. He wanted the FDP to join the Social Democrats (SPD) in a center-left government coalition, after having worked with the conservative CDU. His plan was implemented on October 22nd, 1969, when Scheel became Foreign Minister and Vice Chancellor under Willy Brandt.

In this position, he made history yet again, when he became the first German Foreign Minister to visit Israel. Bonn had diplomatically recognized the Jewish state rather late, in 1965. The Adenauer government was not exactly known for actively working on coming to terms with Germany’s terrible past. With Willy Brandt, Walter Scheel took this overdue step.

After the general elections of 1972, Brandt’s SPD and Scheel’s FDP had more support than before, which translated into more seats in the Bonn Bundestag. At that time, Walter Scheel even became one of the most popular politicians in the Federal Republic, by recording a song.

‘Hoch auf dem gelben Wagen‘ is a rather kitschy German folk song. But the sincere dedication he put into it was audible and visible in a video clip. On top of it all, the proceeds for the recording, which was sold 300,000 times, were given to charity organizations.

In 1974, a huge problem arose. Günter Guillaume, Chancellor Brandt’s right hand, turned out to be a spy for the GDR, the former communist German state. Brandt had to step down, while Helmut Schmidt stepped into his shoes. Hans-Dietrich Genscher of Scheel’s FDP became Vice Chancellor and Foreign Minister. Before the new team took over, Scheel was Acting Chancellor for a few days.

The next position Walter Scheel took over was even higher. He became West Germany’s fourth President on July 1st, 1974, 45 years ago, almost to the day. During his term, he was criticized for not having a concept or vision, and for leading a rather luxurious life at the same time. He conducted 18 state visits until 1979, when he decided not to become a candidate again.

But Walter Scheel did become honorary doctor at four universities in the U.S., the U.K., New Zealand and Germany. After 1979, he accepted countless positions in the boards of countless organizations. In the 1990s, the author of these lines ran into Scheel when he was part of the board of the MABB, the authority which gives out frequencies to TV and radio stations in Berlin and Brandenburg.

Tragedy struck more than once in Walter Scheel’s private life. In 1966, he lost his first wife to cancer. His second wife died early as well, in 1985. In 1988, he married again. Scheel had four children, among them one stepdaughter and an adopted son from Bolivia.

Some ten years ago, Walter Scheel started suffering from dementia. In 2012, he was admitted to a nursing home, where he died in August of 2016 at age 97. Walter Scheel’s grave is located at ‘Waldfriedhof Zehlendorf’ in Berlin.

The Berlin Perspective: Blaming it All on the BVG