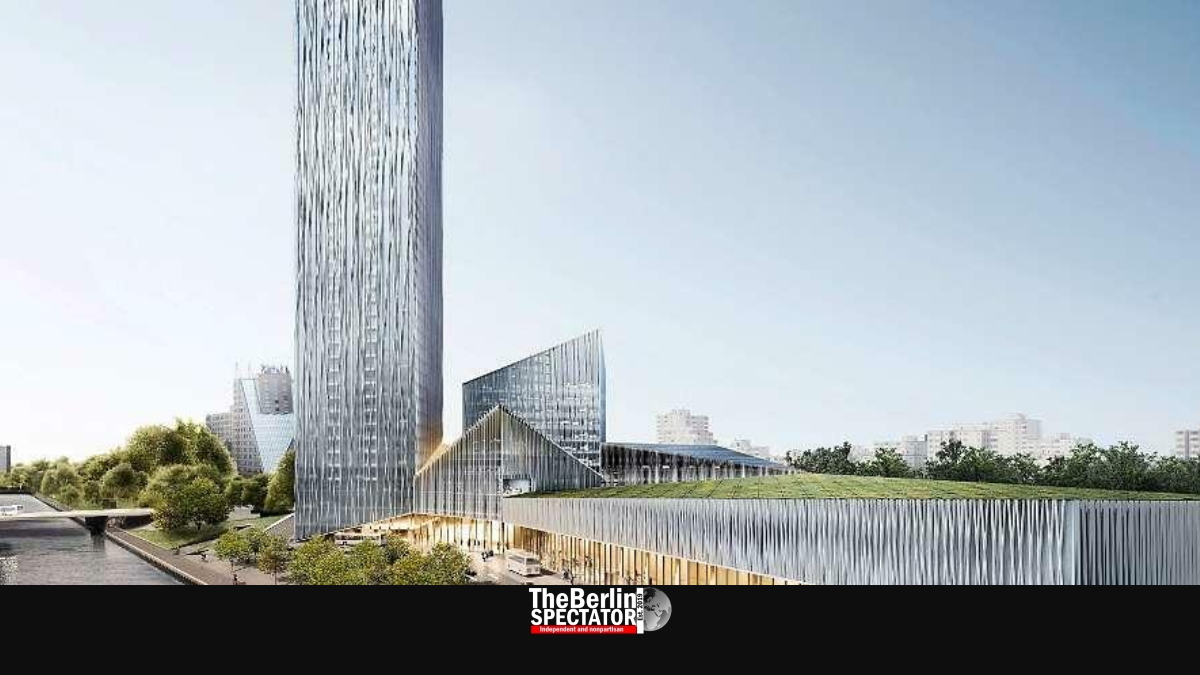 Berlin does not have too many skyscrapers. But there will be one more soon. The Estrel Tower will be the highest high-rise in the German capital. Its erection is scheduled to start this fall.

The existing Estrel Hotel at the Neukölln Shipping Channel (‘Neuköllner Schifffahrtskanal’) is Germany’s largest hotel. Its Sunday breakfast buffet is priceless and the place is generally very popular. Recently, the Estrel became the strongest-selling hotel in Germany. It overtook even the ‘Bayerischer Hof’ in Munich and the Hotel Adlon at Brandenburg Gate.

Being the biggest and having the highest turnover of them all is not enough to the Estrel Hotel anymore. They also want the highest high-rise in the city. And they will have it by 2025. In the fall of 2020, with a six-month delay, the construction is supposed to commence.

Berlin has its TV tower, the highest building in Germany, which celebrated its 50th anniversary last year. It is 368 meters (1207 feet) high. The city also has eight chimneys for heating stations and broadcasting antennas which will still be higher than the Estrel Tower, once it is completed. But this is like comparing low flying geese to ketchup bottles.

The new hotel will not have to fear comparisons with any other high-rise in Berlin. At this stage, the highest one is the ‘Treptowers’ office building (125 meters or 410 feet), which is a few feet higher than the Park Inn hotel (123 meters or 404 feet) at ‘Alexanderplatz’. With its 175 meters (574 feet), the Estrel Tower will be substantially higher than those and therefore have a lot of room for suites with stunning views. It will also be higher than two towers at ‘Alexanderplatz’, one of which is being built right now. The other is still in its planning stage. They will both be 150 meters (492 feet) high.

One aspect delayed the erection of the tower according to the ‘Morgenpost’. It was the construction of the Autobahn A100 in the same area. But that construction site has moved on. Nothing stands in the way anymore. The new Autobahn will give the Estrel Tower access to the new BER Airport which will be opened on October 31st, 2020.

As the largest hotel in the country, the old Estrel offers 1125 rooms. In their new tower, they will have more than 2000 rooms on 46 floors. While these details are now public knowledge, there is one secret: The Estrel Hotel will not say what kind of price tag its new tower comes with.

The existing Estrel Hotel will continue its business, even when the tower is completed. Right now, the hotel is extending its own congress center. It also purchased abandoned train tracks and a bridge between the old building and the spot the tower will be erected on, in order to have a direct connection between them.

The investment makes sense, since more than a million tourists come to Berlin every month, and tens of thousands of business travelers. The best aspect of them all: The new Estrel Tower and the existing Estrel Hotel together will form a ‘gate to Berlin’.