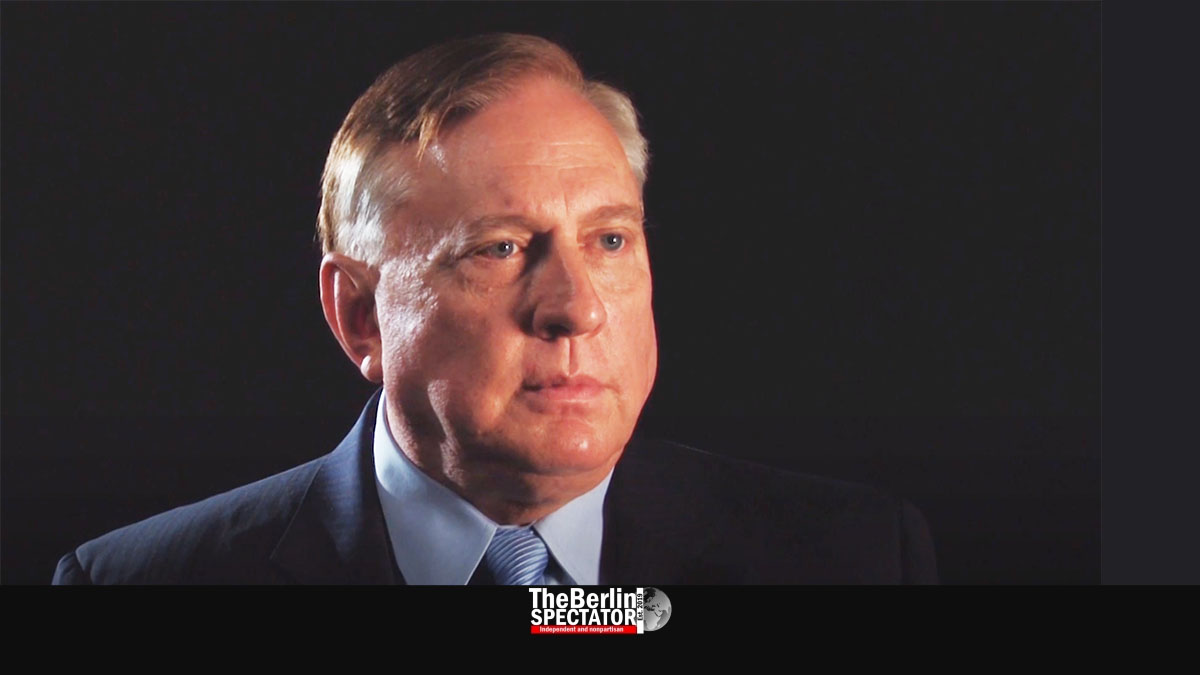 Update November 12th, 2020: Macgregor to become advisor at Pentagon in Arlington (Virginia). Diplomatic mission in Germany seems to be cancelled.

While the United States of America are moving soldiers out of Germany, they are sending in a new Ambassador. Douglas Macgregor is a war hero. One with opinions.

Berlin, July 31st, 2020 (The Berlin Spectator) — When the U.S. armed forces were busy hitting the Iraqi military in 1991, they had a courageous commander. Maybe even a bit too courageous. In the afternoon of February 28th of that year, he led 19 tanks and 26 Bradley fighting vehicles into a battle in south-eastern Iraq.

The Americans went right through a minefield, an action that could have cost lives, but did not. Within 23 minutes, they attacked and destroyed as many as 70 armored vehicles on the Iraqi side, without losing anyone. During this short battle, the big risk paid off. Colonel Douglas Macgregor was the one who took it.

Macgregor is an Army man, even sixteen years after he left. He thinks Army, talks Army and even writes Army. Four of his five books were published while he was officially a soldier. He is not one of those who call for unlimited defense spending. The opposite is the case: Macgregor does not like that “self-licking ice cream cone”.

To him, the latter is a synonym for the “self-perpetuating [defense] industry” he saw in 2012, when he wrote an opinion piece for The Daily Bell. His first book, ‘The Soviet-East German Military Alliance’, was released in 1989, shortly before the Berlin Wall fell and the GDR ceased to exist.

‘Breaking the Phalanx’ followed in 1997. In this book, Col. Douglas Macgregor called for a complete reorganization of America’s ground forces. Even though suggestions of this kind may have been above his pay grade at the time, from the perspective of some Army colleagues, one superior of his even endorsed the publication and passed it around to people.

Features on The Berlin Spectator (This article continues below.)

In 2001, ten years after his stunt in the Iraqi desert, Macgregor wrote about it in ‘Warrior’s Rage: The Great Tank Battle of 73 Easting’. In 2003, ‘Transformation Under Fire’ dealt with big questions about the duration of U.S. Army deployments, military strategies and what the Pentagon in Arlington (Virginia) calls “enhancing responsiveness”.

‘Margin of Victory’, Macgregor’s last book to date, views “the outcomes of five horrific twentieth century battles through the lens of military strategy”. On thing is certain: Even today, he is still a soldier. Douglas Macgregor might view everything, including a diplomacy mission in Berlin, as a battle he needs to win. And he definitely does not like to lose.

Is he the kind of loose cannon his predecessor Richard Grenell was in the diplomatic arena? Probably not, but the government in Berlin might be surprised.

Former Defense Minister Donald Rumsfeld appreciated Douglas Macgregor’s advice on the new war in Iraq. Under General Wesley Clark, the Colonel planned attacks in former Yugoslavia. He also advised the Israeli Defense Forces. On a regular basis, he comments on politics and military issues on the ultra-conservative channel Fox News, a business that could be seen as a battlefield of a different kind.

Trump’s “new guy” in Berlin, Douglas Macgregor, grew up in Philadelphia. He has lived in West Germany. This is where he was “sent to study”, he said in an interview with the American Veterans Center, meaning he did his 11th grade in the Federal Republic.

The new American Ambassador comes in at a critical time. President Trump is moving 12,000 soldiers from Germany to Belgium, the U.S. want to prevent the North Stream 2 pipeline project from becoming operational, and the transatlantic relations are generally not that good.