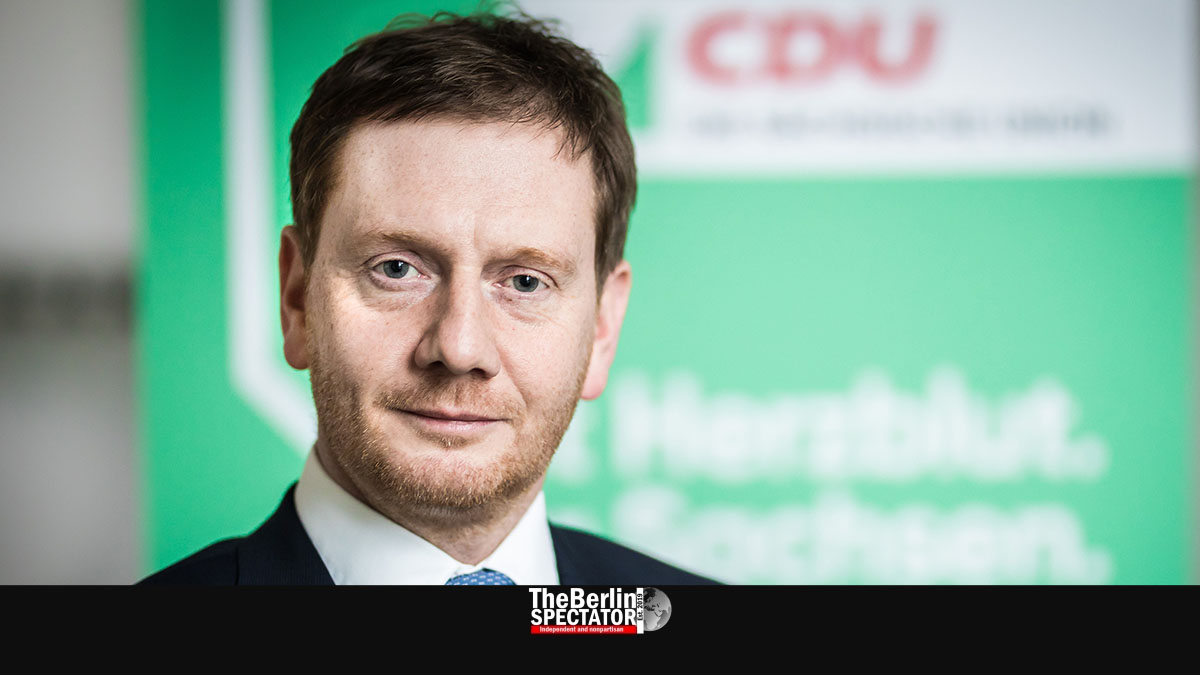 In Germany, the number of high-ranking politicians who are calling for an end to the lockdown in February is increasing. One of them is Saxony’s First Minister Michael Kretschmer.

Berlin, January 23rd, 2021 (The Berlin Spectator) — Saxony used to be Germany’s main Corona hotspot, with a situation that defied description. In some counties, the Seven day Incidence Numbers rose to 600 and even 800. Now, things are improving. Saxony is now the federal state with the fourth-highest Incidence Number, behind Thuringia, Saxony-Anhalt and Brandenburg.

Now that the lockdown has led to a decrease of the number of new infections, to some extent, Michael Kretschmer, Saxony’s First Minister, wants to end it. In an interview with the ‘Welt’ daily, he said on his mind education was the highest priority. The senior years were already back at school. After February 14th, the reopening of kindergartens and schools needed to progress, if this kind of step was viable then.

First Minister Kretschmer also told the daily, hairdressers needed to open at that point. In March, retail businesses had to be allowed to reopen. What the borders are concerned, Kretschmer said the approach that needed to be taken depended on how neighboring countries were dealing with the Corona pandemic. “We cannot put in place drastic measures in Dresden, but open shops in the neighboring country”, Kretschmer told the ‘Welt’. Saxony shares borders with both Poland and Czechia.

The government’s goal is to get the Seven Day Incidence Number down below 50 and keep it there. Both experts and laymen are convinced this target cannot be reached by February 15th, because the number of new infections is decreasing too slowly. Still, there are more voices who demand an end to the lockdown by February 15th.

Georg Nüsslein, the conservative CDU’s deputy floor leader at the Berlin Bundestag, went a lot further than Kretschmer. He told the ‘Augsburger Allgemeine’ daily, because of the massive ramifications it was not responsible to have an extensive lockdown until the Incidence Number dropped below 50 or even 35. In February, a new approach needed to be chosen, unless unexpected events, such as spreading Corona mutations, precluded this kind of step.

Nüsslein’s colleague, floor leader Ralph Brinkhaus, one the other hand, told the ‘Passauer Neue Presse’ daily, the reopening of schools should not take place too early.

In Berlin, the Robert Koch Institute reported 16,417 new Corona infections within 24 hours. The latest number of Corona-related deaths within one day is 879. Germany’s Seven Day Incidence Number dropped slightly, from 115.3 on Friday to 112.6 today.

In the meantime, AstraZeneca announced it would deliver less Corona vaccine doses to the European Union than initially planned. During a press conference on Friday, Germany’s Health Minister Jens Spahn stated he was confident many people could be vaccinated with the company’s product in spite of the announced delays. In the past two weeks, some German-language media had repeatedly accused the government of having failed in regard to the ordering of a sufficient number of vaccine doses, even though the E.U. placed the orders, and in spite of the fact that production and delivery issues are the main reason for the shortage in Europe.