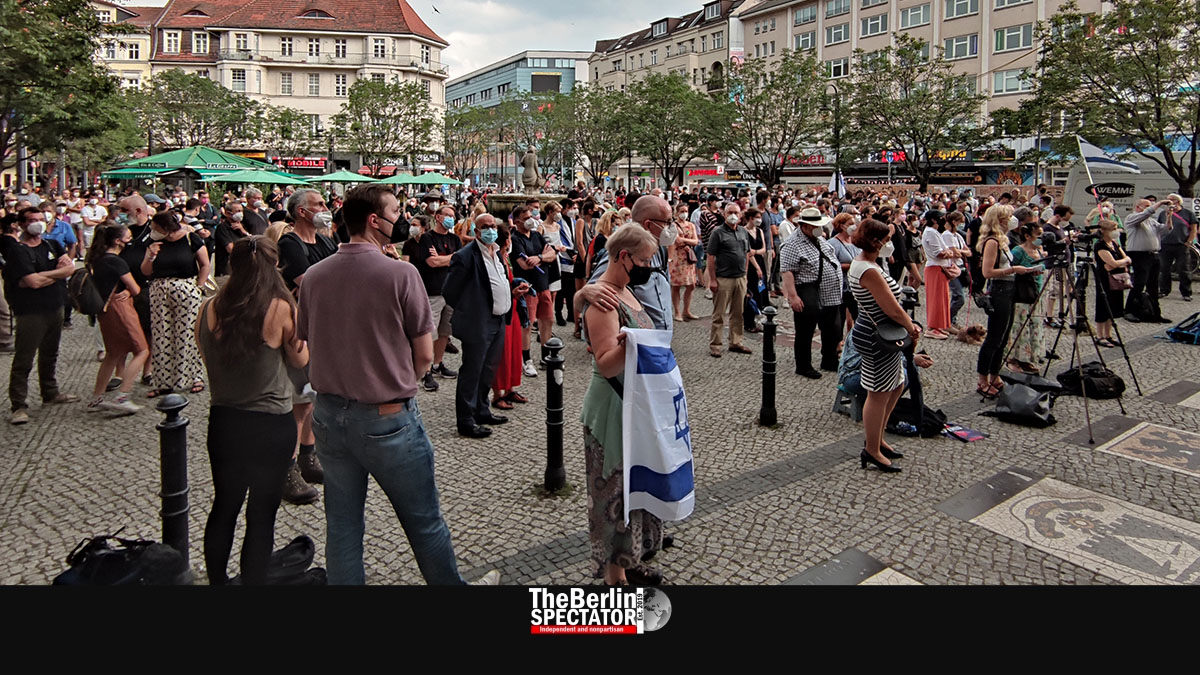 On Sunday, several groups organized a protest against Jew hatred in an area known for antisemitic tendencies, namely Berlin’s Neukölln borough. Its motto was “Jewish life is not a provocation.”

Berlin, July 26th, 2021 (The Berlin Spectator) — A day after yet another antisemitic demonstration took place at Hermannplatz square in Berlin’s Neukölln district, an alliance of several organizations and their supporters got together for one against Jew hatred. At ‘City Hall Neukölln’, some 300 people gathered for the rally the motto of which was “Jewish life is not a provocation”. The protesters demanded safety for everyone, including Jews, in Neukölln and all of Berlin. Posters that said “End Jew hatred” were distributed.

Speakers criticized the fact that Jews who are recognizable as such have been insulted and attacked, both verbally and physically, in the past years, especially in Neukölln, where many Arabs and Turks live, but also in other parts of Berlin. Jews who wear kippahs or the Star of David on chains are not safe in certain areas in the German capital, 76 years after Nazi Germany was defeated. Today, the rising hatred towards Jews comes from the far-right, as it always did, but also from the far-left and from antisemites within the large Muslim community.

At the event, Neukölln’s District Mayor Martin Hikel said the fight against antisemitism was a fight for democracy. The fact that Jews had to be afraid on the streets of Neukölln or elsewhere in Berlin was not acceptable. Antisemitism came in many forms today, Hikel stated, including as hatred towards Israel. Trying to delegitimize the only Jewish state or demonizing it was pure antisemitism. The District Mayor was referring to the most recent antisemitic protests.

For the Mideast Freedom Forum Berlin, Jörg Rensmann said at the protest, radical Islamist groups that were enemies in the Middle East, including Hamas, Fatah, the PFLP and Hezbollah, actually cooperated in Berlin by spreading antisemitism on the streets of Berlin together. The organizers of yesterday’s rally said they wanted to raise their voices against Jew hatred where it appeared on a daily basis, in Neukölln, and show solidarity with Jews in Berlin.

Not even a mile away from ‘City Hall Neukölln’, at ‘Hermannplatz’, another antisemitic demonstration had been staged on Saturday. Its organizers abused the LGBTI theme on the day of Berlin’s Christopher Street Day. Journalists who covered the event were harassed by the organizers. Facts about the treatment of gay men in the Palestinian areas, which includes arrest, torture and even murder, were not even mentioned at the rally. But Israel, a country in which gays, including Palestinian ones, have equal rights, was demonized by the participants.

In May, several antisemitic rallies took place in Neukölln and Kreuzberg. One was organized by Samidoun, a group that is directly affiliated with the Palestinian terror organization PFLP, others by groups such as ‘Palestine Speaks’ and BDS. The latter movement claims it was against violence, but still organizes events with convicted terrorists who are responsible for the death of Israeli citizens. It also calls for boycotts against Israeli companies, Israeli artists, Israeli scientists, artists who intend to perform in Israel and companies which sell products in Judea and Samaria. The Berlin Bundestag has labelled it as antisemitic.