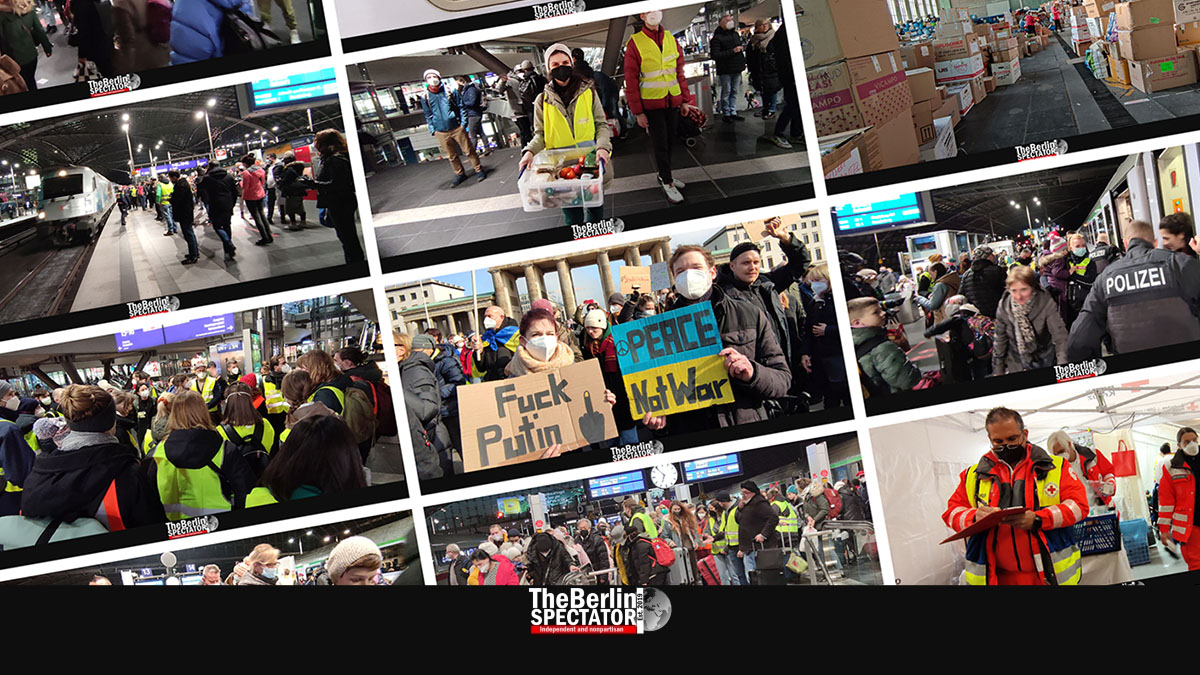 When Russia started attacking Ukraine, Berlin’s finest did not engage in lengthy discussions about what should be done. They did not list the things that could not be done, with even longer lists of reasons. They just went and helped.

Berlin, March 24th, 2022 (The Berlin Spectator) — Germans believe they are good at organizing and planning things. They probably are, except when it comes to airports or setting up fast Internet connections. Generally, planning and organizing anything eats up a lot of time. Sometimes, just doing things and talking about them later is just the right strategy. In the past month, the combination of both approaches was the aspect that helped Germany help.

Some 200,000 war refugees have come to the Federal Republic of Germany, so far, since Russia’s President Putin launched his war against his Ukrainian neighbors. The inner urge to implement a fantasy about a new Russian empire is more important to him than people’s lives. It led to the largest tide of refugees since WWII. Poland is accommodating far more of them than Germany, but supporting 200,000 refugees is a challenge too, one that Germany took on and rose to.

For a month, hundreds of thousands of Germans and residents of other nationalities played a rule in this. Countless people have joined dozens of protests against the war. By doing so, they showed the Moscow regime they oppose this kind of aggression along with the rest of the Western world. While the protesters rallied, mostly in front of the Russian Embassy and at Brandenburg Gate, the volunteers took action.

At Berlin Central Station, a big influx of war refugees commenced all of a sudden. Helpers of countless nations came and helped. They still do. Many of the volunteers speak the right languages because they have Ukrainian roots. Some war victims themselves became volunteers (read separate article ‘Berlin: The Ukrainian Refugee who Came to Become a Volunteer‘) too, once they arrived in Berlin. Quite a few Russians are volunteers as well. Obviously, this is a good and important sign.

Without the volunteers, Berlin would have turned into a big mess within hours. Some of them hardly slept during the first days. Then, after a week, the city state itself became organized. It increased the number of refugee hostels, set up a ‘welcome tent’ in front of Central Station, turned former airports into refugee centers and dealt with transport issues. Recently, the Federal Republic of Germany finally got organized too. It set up two more welcome points, in Hanover and Cottbus, and began transporting Ukrainians to accommodations in all parts of the country.

The refugees receive free Corona vaccinations, free medical treatment, free accommodations, free meals, they can apply for social welfare, and Ukrainian children are being welcomed in “welcome classes” at German schools. In the meantime, NGOs are collecting tons of donations, including medication, clothing, toys and food. The organizations are also making sure everything is transported to the places where it is needed, in Ukraine.

These days, Berlin is working on making it easier for Ukrainian war refugees to get residence permits. With those, they have the right to work in Germany. So far, the city has accommodated 20,000 of them. Thousands more were invited by Berliners to stay with them, in their homes. Neighboring Brandenburg accepted 15,000 people so far. The influx of refugees continues. At former Tegel Airport in Berlin, 3,900 of them can be accommodated at night, before they are being sent to other cities or regions. But Berlin might double the number of beds at the location because the wave of people who are fleeing from Putin’s war is not receding.

Do we, the Berliners, know what it feels like when loved ones die in a war? Do we know what it is like when missiles destroy homes, when families cannot leave because it is too dangerous, and when sons, brothers and fathers have to stay behind to fight? Luckily, we can’t. We can only try to imagine what the refugees went through and what they are still dealing with. And we can help.