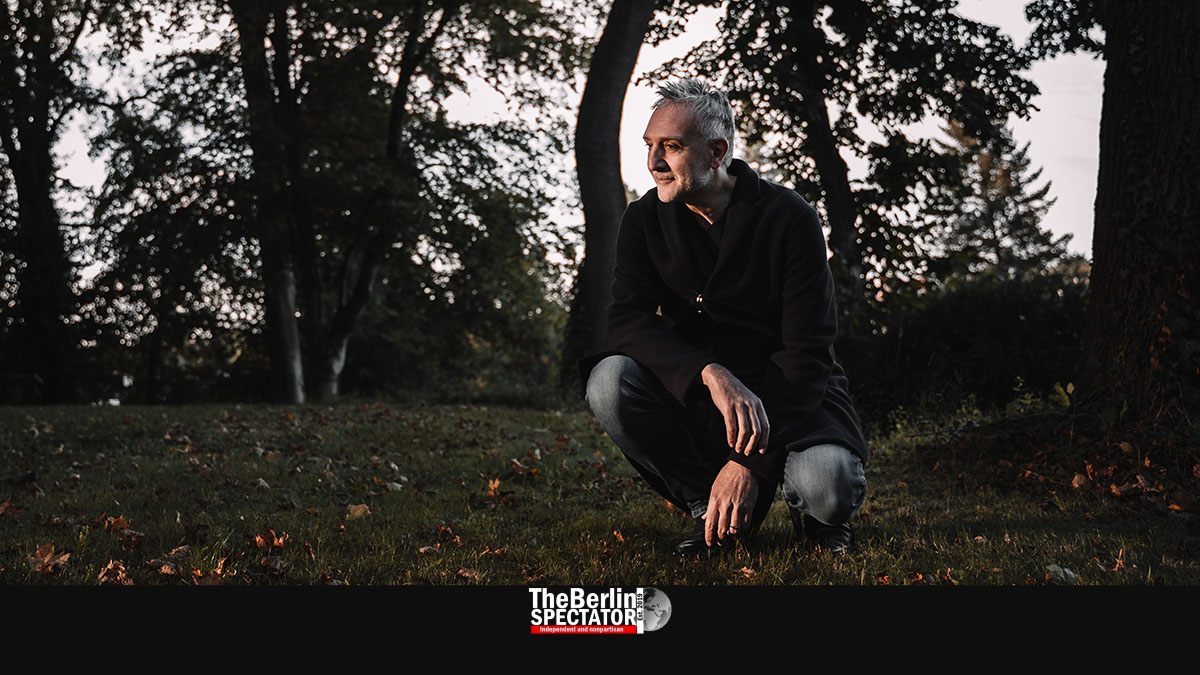 Berlin has 3.8 million inhabitants. One of them is Corrado Rustici. In Italy, he cannot walk the streets without being stopped by fans. In Berlin, he can. And he is enjoying it.

Berlin, May 9th, 2022 (The Berlin Spectator) — Berlin has dozens of lakes, from ‘A’ like ‘Arkenberger Baggersee’ to ‘Z’ as in ‘Ziegeleisee’. The city state also shares quite a few lakes with neighboring Brandenburg, including the big ‘Wannsee’. Corrado Rustici, who was born in Naples, Italy, and lived in the United States of America for 41 years, likes taking walks along its banks.

As it turns out, he moved to Berlin with his family in 2020, the minute Corona hit. Because of the pandemic, the man all Berliners know without being aware of it has not had the chance to discover the city and its culture much. He was busy playing with his kids and working on projects he implemented in the studio he set up in the basement of his house. But those lockdowns and contact restrictions kept him from exploring Berlin. This is what he is into now, when he is not traveling or recording music.

Finally, there it is, the most important word in this feature: ‘music’. This is what Corrado Rustici is about. As a guitarist, vocalist, composer, arranger and producer he has reached more people than most fellow musicians on this planet. Billions have heard him play or sing, including all adult Berliners. In most cases, they never knew it was him.

At times, Corrado Rustici is surprised about his influence himself, for instance when he goes to the supermarket to get those Italian, French and Swiss cheese he likes so much. “Here we go again. That’s me.” This is what he tells his wife when the late Whitney Houston plays in the background. “How will I know if he really loves me? I say a prayer with every heartbeat.” This big hit was played by almost all radio stations 24/7, for decades. And he’s the guy on the guitar.

When he turns on the radio in the car and they play the late Aretha Franklin’s 1988 album, Rustici listens to himself. Berlin is listening to him. So are Germany, Europe and the world. We have inhaled this man’s music for forty years, and he became our neighbor in Berlin. Aretha and Whitney are only two of countless big artists Corrado Rustici has cooperated with.

Niche of the Niche

He also recorded with Elton John, George Benson, Jefferson Starship, the late Al Jarreau, Sister Sledge, Narada Michael Walden, Larry Graham and Dionne Warwick. Yes, next time you hear ‘No One There (To Sing Me a Love Song)’ you will know your Italian neighbor in Berlin is playing the guitar. He was also part of studio sessions with singers only die-hard Soul fans, including the author of these lines, know. Angela Bofill is one example. Rustici played on two albums of hers. But, believe it or not, all of this is only a tiny part of his achievements.

Playing the guitar or the MIDI guitar with countless American artists is one thing, having a lot of influence on Italian music another. It all started with an Experimental Rock or Progressive Rock band called Cervello, in 1973, which still has fans around the world today. “Oh, that one totally failed”, Corrado Rustici says, laughing. “Progressive Rock was niche music. But we were the niche of the niche”, he told The Berlin Spectator.

Later, the one album they recorded became “one of the top Prog Rock albums in the world”. In 2019, he and the other members got back together for a sensational concert in Japan. “We were influenced by King Crimson, the Mahavishnu Orchestra and Gentle Giant”, Rustici explains. Boom! The influences he mentioned show where the Italian multi-talent is coming from, namely the best of the best. When the Cervello album was recorded, he was only 16.

He and a bunch of friends founded another band called Nova, in 1975. They left Italy and went to London in order to work on the first album. “At that time, Italy was not the place at which you could meet and play with great names”, Rustici remembers. Until 1978, they released four records. At the studio, they cooperated with a young guy (or shall we say ‘bloke’?) by the name of Phil Collins, before he became a star with Genesis.

“I knew Phil already”, Corrado Rustici says. “My older brother Danilo had a Prog Rock band called Osanna. They were interesting, also because they painted their faces and they had actors. I was one of them.” Genesis had been “kind of unknown at the time”, he states. “They opened for my brother’s band for three nights. We became friends with Phil, Peter and everyone. They were all very nice.” Sadly, Danilo Rustici died last year, of COVID-19.

All of this, the work with Cervello and Nova, was only part of the activities that made Corrado Rustici one of the most prominent musicians and producers in Italy. Decades later, in 1995, when he had some time in between gigs, he recorded a solo Pop and Rock album entitled ‘The Heartist’. Since, he has released another three solo albums, one as recently as last year, when he already lived in Berlin. It is entitled ‘Interfulgent’ and features interesting Fusion and Ambient sounds.

In 2020, The Berlin Spectator published its first preview about a tour the Italian singer Zucchero was going to embark on. Because the Coronavirus messed up the tour, the piece was republished twice, with new concert dates. The article mentioned a producer by the name of Corrado Rustici who had contributed a lot to making some of Zucchero’s albums the most successful recordings in Italian history. To the surprise of the author of these lines, Rustici sent him an e-mail from Berlin, which is where he had moved to from California.

How did Corrado Rustici even manage to produce ‘Blue’s’ and other Zucchero albums that sold better than any other Italian record? “I don’t know. You know, you just do your best”, he says. “Back then, I was really not interested in producing Italian stuff. At that time, I was playing with Aretha Franklin, Whitney Houston. To me, the dream of playing as an American musician was happening.” Since he was always good at arranging songs, he did have an influence on the direction those albums by American stars were taking, as their studio guitarist.

“I was in Italy for the first time in five years. Before, I had not been able to go back because I had refused to join the army. Finally, I did manage to renew my passport and go. There, a man called me and said there was this guy who was making some demo tapes. Why don’t you put a band together? I said no, because I was on vacation. But he called me and insisted. That was how I met Zucchero. So, I did put a band together.” The rest is history. One album led to the next.

Because of the first success, the label Polygram called Rustici and asked him to work on another album for Zucchero. “Because there was no Internet at the time, I did not know the album had been successful. I just didn’t know what was happening on the other side of the Atlantic Ocean”, he explains. “I told them ‘Look, there is only one condition: I do the foot production, because every time I gave you those tracks you messed them up with the vocals and mixes, which is terrible.'” This conversation led to Zucchero’s ‘Blue’s’ album. “1.6 million copies sold in Italy alone. It was incredible.”

Corrado Rustici remembers something else too: “I had to fight for the sound. Everyone involved was against me. They said ‘Oh, the music is too Black and too American.'” Rustici told Zucchero to trust him and predicted the kids in Italy would love this kind of sound. Obviously, he was right. This cooperation led to so many big hits including ‘Senza Una Donna’, a song that invaded Germany and many other countries like a tsunami. Over the years, Corrado Rustici also worked with other Italians who either were stars already or they would become successful with his help.

The Berlin neighbor everyone knows without really knowing him is still active all the time. He is preparing a very promising, historic but also very secret project with fellow stars.

Anyway, none other than Corrado Rustici decided to move to Berlin. Why? Apparently, the only two cities in Europe he was ready to live in were London and Berlin. “I have a lot of affection for London, where I spent my formative years and learned a lot. Those were great times, and I still love London.” But, with his German wife, he decided against it. This decision left them with one option: Berlin.

“I did not want to live in Italy. I can’t deal with that because I am sort of Nordic. I like northern Europe. The lifestyle fits me better than being in the south.” Of course, he likes visiting his birth country, but living there would be too much. Berlin is just the right spot. “I had been to Berlin before and always liked it. So, I thought, from what I was hearing, and also musically, Berlin is the capital of Europe. It is not a typical German city, which makes it interesting. That is my impression.” Corrado Rustici, our fellow Berliner, is right.

The Berlin Spectator needs your support.
There are two ways to contribute, as you can see on our Donations Page.
We also thank our 15 regular supporters who donate about 8 Euro per day, in total.
In order to become a stable project, this publication needs at least 40 Euro per day. Would you consider becoming a supporter on Paypal (one-time or monthly donations) or a patron on Patreon (monthly donations)? Thank you very much.