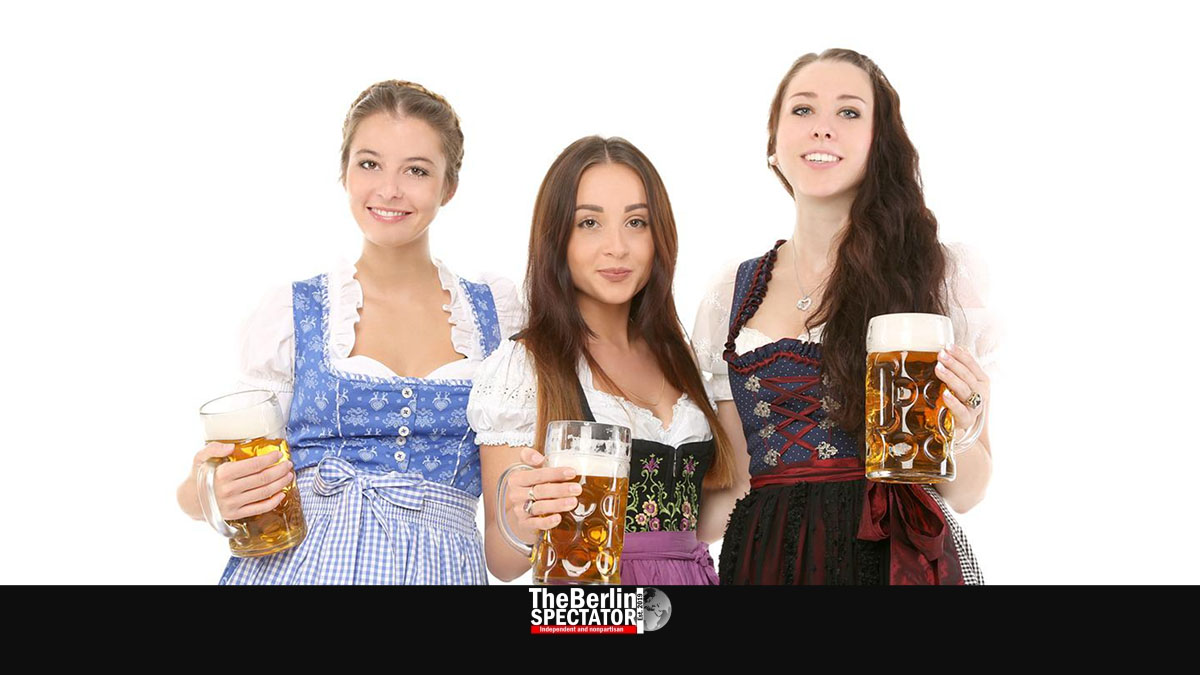 This year’s Oktoberfest is only weeks away. The main activity remains drinking. While modern items such as e-scooters and drones are forbidden at the ‘Wiesn’ location, exaggerated beer prices are allowed. Cheers.

Berlin, July 13th, 2022 (The Berlin Spectator) — The Oktoberfest was initiated when Prince Ludwig married Princess Therese of Saxe-Hildburghausen on October 12th, 1810. People were invited to drink and celebrate on a field called Theresienwiese. The royal couple is not alive anymore, but the location is. So is the drinking.

Coming together and drinking like crazy, while listening to Bavarian music: The concept of the Oktoberfest is as simple as it is convincing. So, the fact that the traditional event has been exported is not really a surprise.

The Oktoberfest Chicago usually offers “steins”, whatever they think that is, and sausages at 14 spots in the Windy City. In the Valencia neighbourhood of Santa Clarita, California, a local brewery has been staging an Oktoberfest too. And in the beautiful Mexican town of Morelia, the local Oktoberfest is about “¡Amor, alegría y cerveza fría!“, love, joy and cold beer. ¡Muy simpático, paisanos!

Of course, the concept is spreading in Europe as well. In Budapest, the Oktoberfest usually takes place at Kincsem Park. Brașov, in Central Romania, usually is in it too, with an Oktoberfest at the Stadionul Municipal. Even Sofia, the Bulgarian capital, usually has its version of the Bavarian drinking event. Within Germany, some small offshoots usually take place as well, including the ‘Oktoberfest auf dem Alexanderplatz’ in Berlin.

This year, there will be 17 large beer tents and 21 small ones all over the Theresienwiese. In 1910, when the ‘Wiesn’ celebrated its 100th anniversary, the ‘Pschorr-Bräurosl’ tent was the largest ever. It accommodated 12,000 guests. Back then, 12,000 hectoliters of beer were served. The drinking had to stop during the two world wars. Tragedy struck on September 26th, 1980, when a bomb exploded at the main entrance to the event. Thirteen people died on the spot, including Gundolf Köhler, the culprit.

For the 200th anniversary, in 2010, additional historic tents were set up. We will see what they will come up with in 2110. Maybe they will serve even more beer and pretzels. If there is anything the Bavarian state government hates to do it is cancelling the Oktoberfest. But in both 2020 and 2021, this is exactly what had to happen because of the Corona pandemic and the contact restrictions that were in place.

Bavarians and international tourists can’t get enough of the Schuhplattler dances, the pretzels, the fluids, and of urinating all over the ‘Wiesn’. Before Corona, many Americans showed up every year. So did Japanese and Australian visitors, and of course the Austrians, the Dutch and the Italians.

At each edition of the Oktoberfest, millions of liters of beer are served. Of course, there need to be some rules. The owners of those beer tents on site are forced to play Bavarian brass music until 6:00 p.m. every night. Later, they may switch to Pop music. Frankly, it is hard to say what is worse.

Are there more rules? Yes. For security reasons, no drones or e-scooters are allowed on the Theresienwiese. According to rule no. 1, backpacks are forbidden on the premises. Rule no. 2 says backpacks may be brought if they do not exceed a size of three litres or a size of 20 by 15 by 10 centimeters. Are these rules confusing? You bet.

One thing is certain: The future has arrived at the Oktoberfest. An ‘Oktoberfest App’ will show users where to get drunk and where their drunk friends are located. What would Price Ludwig have thought of the app? How would he have liked the fairground with lots of amusement rides that are part of it too? We will never know.

More details can be found here, on the Oktoberfest’s official website.