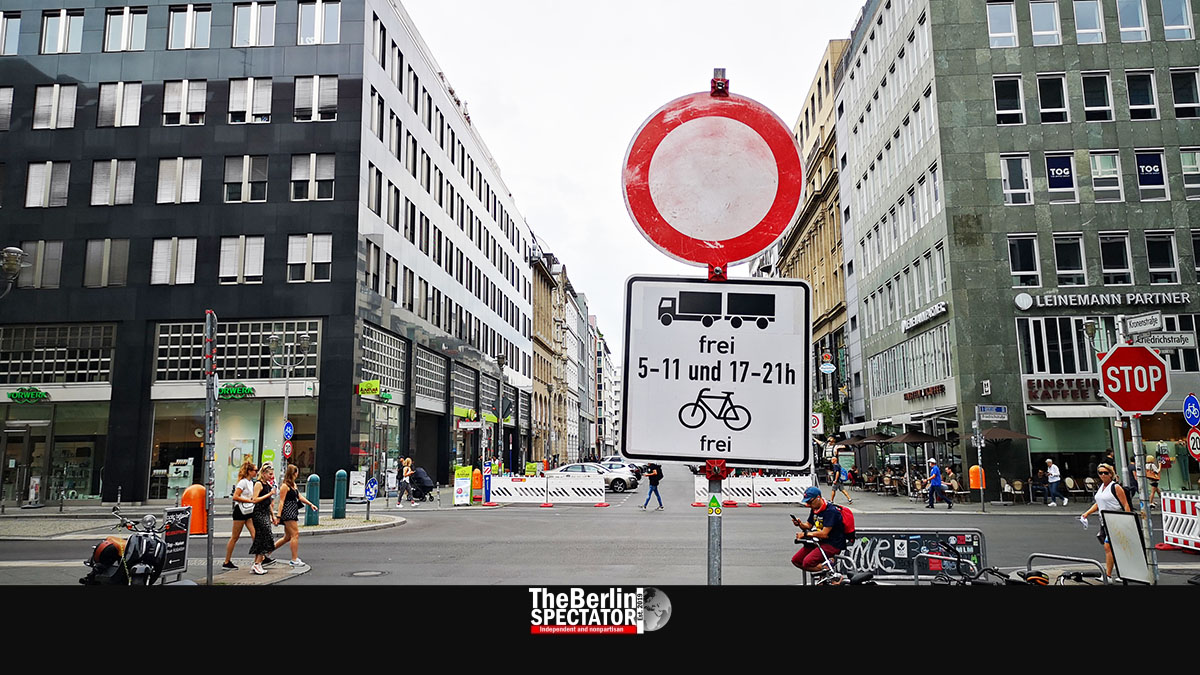 One of the most famous streets in Berlin is ‘Friedrichstrasse’. It accommodates luxury shops and historic spots. Now the Berlin Senate wants to make it more attractive and started an experiment.

Birth of a Street

Then the fields were turned into building plots, streets and blocks were built. Once there was ‘Unter den Linden’, the elegant street that connects Brandenburg Gate to Schloss Bridge today, it needed intersecting streets. One of them even got the official name ‘Intersecting Street’, until Frederick III insisted it needed a proper name. His name. That is how ‘Friedrichstrasse’ was born.

Over time, it developed into an elegant shopping street. In 1945, after World War II, there was not much left of ‘Friedrichstrasse’. Then it was split up. Its northern part, in today’s ‘Mitte’ district, became part of East Berlin, the capital of the communist GDR, while its southern part was in West Berlin’s Kreuzberg district. The Berlin Wall and Checkpoint Charlie separated the two parts.

In the past decades and centuries, everyone lived in Friedrichstrasse, including the author Christa Wolf, her colleague Theodor Fontane, the scholar Alexander von Humboldt and even Friedrich Engels who probably like that street name. But not all residents and visitors liked the street and what it stood for. Some thought it was decadent. This has not really changed since.

‘Friedrichstrasse’ was a tourist haven when Berlin welcomed up to 14 million of them per year, before Corona hit. Many Berliners cannot really afford Gucci products, nor would they want them if they could. So the Berlin Senate and the ‘Mitte’ district looked for ways to fill the street with life.

Yet Another Christmas Market

How does one change the appearance of a street in the city center? By turning it into a pedestrian zone and calling it a ‘strolling promenade’ (‘Flaniermeile’ in German) to make it sound more intriguing. On Friday evening, the district started setting up barriers. This time, they are not marking the border between two versions of Germany, but separating the regular street from the ‘strolling promenade’.

In order to “revive” ‘Friedrichstrasse’, trees in big buckets will be spread along the stretch they are converting, between ‘Französische Strasse’ and ‘Leipziger Strasse’. Benches are supposed to be added. So will cafés with outdoor tables, now that the summer is almost over. Berlin would not be Berlin if it did not add a bike lane too. There is more: Designer markets (whatever that is) and a Christmas market will pop up here, on the ‘Friedrichstrasse’ promenade, just steps away from the famous Christmas market on ‘Gendarmenmarkt’.

The whole thing is an experiment with the purpose of establishing how the “stay quality” in Berlin’s city center can be improved. In late January of 2021, this stretch of ‘Friedrichstrasse’ will supposedly be converted back to what it was until Friday: An expensive shopping street open for all kinds of traffic.

Not everyone is enthusiastic about the experiment. The conservative opposition at Berlin’s House of Representatives usually objects to anything the Senate does. Berlin is ruled by a three-way center-left coalition headed by Governing Mayor Michael Müller, a Social Democrat. Apart from the opposition, trade associations do not seem like the experiment too much either. But none of the critics, nor anyone else have seen the outcome of the experiment. It has not even started.

The experiment of ‘Friedrichstrasse’ officially commences on August 29th, 2020.