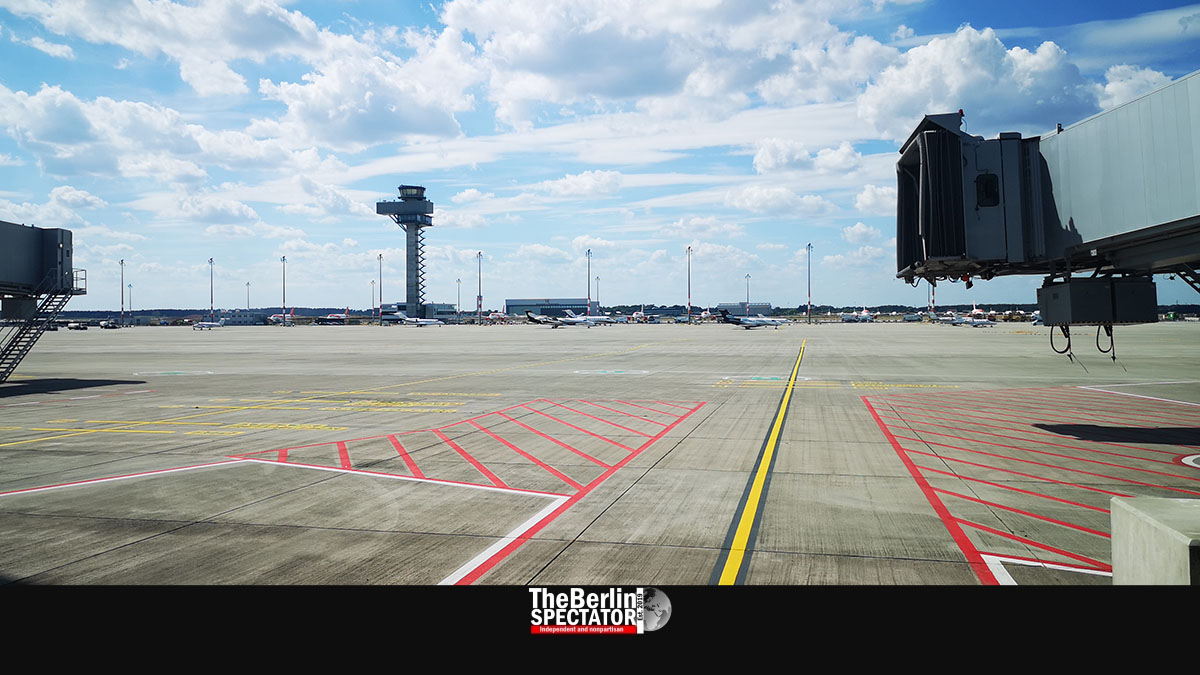 In the Berlin Brandenburg region, BER Airport will be replacing both Tegel and Schönefeld Airport soon. The first two flights are supposed to land on October 31st, 2020. It is time to head to the check-in counters.

Berlin, September 30th, 2020 (The Berlin Spectator) — With a delay of nine years, Berlin Brandenburg Airport, also known as BER, will open in a month from now, on October 31st, 2020. According to the airport’s CEO, Engelbert Lütke Daldup, the project is “none we could boast about”. He is right.

It had not been easy to get to the inauguration, he stated. “Berlin and Germany became a laughing stock. We, Germany’s engineers, were embarrassed.” Lütke Daldrup also said the fact that the costs for BER Airport had more than doubled, to 6 billion Euro (7 billion U.S. Dollars or 5.5 billion Pounds Sterling) was unacceptable.

“Therefore there will not be any big inauguration party. We will just open the airport”, Engelbert Lütke Daldup announced in Berlin. But there will be a relatively small inauguration event organized by the Schönefeld Trade Association on October 30th, one day ahead of the actual opening. It is not the kind of huge inaugural event an airport like this one would usually get, under normal circumstances.

Located just south of Berlin in Brandenburg province, in Schönefeld, BER will be the only major airport for the Berlin Brandenburg region. It is replacing Tegel Airport and Schönefeld Airport. The latter will become Terminal 5 of BER Airport, a week before the new one opens. Tegel is supposed to be turned into an industrial park with its own research center.

Tegel’s new establishment got the coolest name imaginable, namely ‘Berlin TXL – The Urban Tech Republic’. Its advantage is that nobody will have to put on their seatbelts or remain seated until the captain has turned off the seatbelt signs and the damned aircraft came to a complete halt.

Many Berliners are sad about the closure of Tegel Airport. Its first version was hastily built during the Soviet Berlin Blockade. Tempelhof, the other major airport within Berlin, could not handle the load during the Berlin Airlift alone. While Tempelhof was shut down for good in 2008, Tegel is still in service, for now.

During the Cold War, the Allies did not let German airlines fly to Tegel. The legendary American airline PanAm was very active there. On January 2nd, 1960, the first regular passenger flight to Tegel took place. It was an Air France flight that landed there.

Guess what: Air France will also be the last airline to take off from Tegel Airport. On November 8th, 2020, an Airbus owned by the French airline will leave Tegel for Charles de Gaulle Airport in Paris as flight no. 1235 at 3:00 p.m. CET. An “appropriate farewell” for Tegel is what Engelbert Lütke Daldup announced. Très bien.

This airport’s observation deck is scheduled to reopen on October 3rd, for a few days, until the last aircraft has blown its kerosene clouds into the spectators’ faces. From that moment, Berlin will not have any airport on its own turf anymore. Everyone will have to take off and land in neighboring Brandenburg.

BER Airport is elegant. Its Terminal 1 can handle 28 million passengers per year. There is a Terminal 2 which was just completed, on time. In this case, German engineers and the construction workers involved showed that they can complete projects as planned after all. The same applied in regard to the shiny new police building at BER.

But, because something known as Corona screwed up the passenger flight market, Terminal 2 will not be needed. Therefore, it will be inaugurated next summer, on 2021, if things look better by then. Before Corona, the major airports in Berlin and Brandenburg kept on breaking their own records. In late 2019, the 35 millionth passenger was drowned in prizes. It will take quite a while until the numbers will be back at that level.

Getting to BER Airport, and back to Berlin, will be easy. That is because the new airport has its own train station. No, passengers will not have to walk forever in order to get into Terminal 1 or 2. More walking is required for reaching ‘Terminal 5’, the old Schönefeld Airport. Going by bus is a good alternative in this case.

BER Airport also has 13,000 expensive parking spots and more shops and restaurants than Tegel and Schönefeld offered. It will feel like a full-blown airport, but it will still be located in the Berlin Brandenburg region with all implications what flight connections to intercontinental destinations are concerned.

Frankfurt, Munich and Düsseldorf are running the main airports in Germany. That is where flights to Adelaide, Bogotá or Chicago take off, in regular times. Berlin mainly offers connections to European capitals and other cities on this continent. But the owners of BER Airport, namely the city state of Berlin, Brandenburg Province and the Federal Republic of Germany, hope this will change for the better, at some point in post-Corona times.

Lufthansa and Easyjet will be the first airlines to land at BER Airport. On October 31st, 2020, they will have one incoming flight each. Part of the federal government’s official fleet will be moving to BER as well, on October 21st, ten days ahead of the actual opening.

Lütke Daldrup said he hoped the other part of the fleet, which is based at Cologne Bonn Airport, would be following soon. A move of that kind would help the environment. That is because the aircraft in Cologne often fly to Berlin without passengers, in order to pick up Chancellor Angela Merkel, federal ministers or government delegations. After taking them back to Berlin, they perform more empty flights back to their base in what Berliners still call “West Germany”. Hundreds of those took place per year, before Corona hit.

What regular passenger flights are concerned, Engelbert Lütke Daldrup expects to get back to pre-Corona levels in 2024. This year, 2020, the Berlin Brandenburg airports, including BER, might have up to 26 million passengers, if they are lucky. That would be 10 million less than last year. For that reason, BER needs something called money from its owners. They will have to pile it up high.