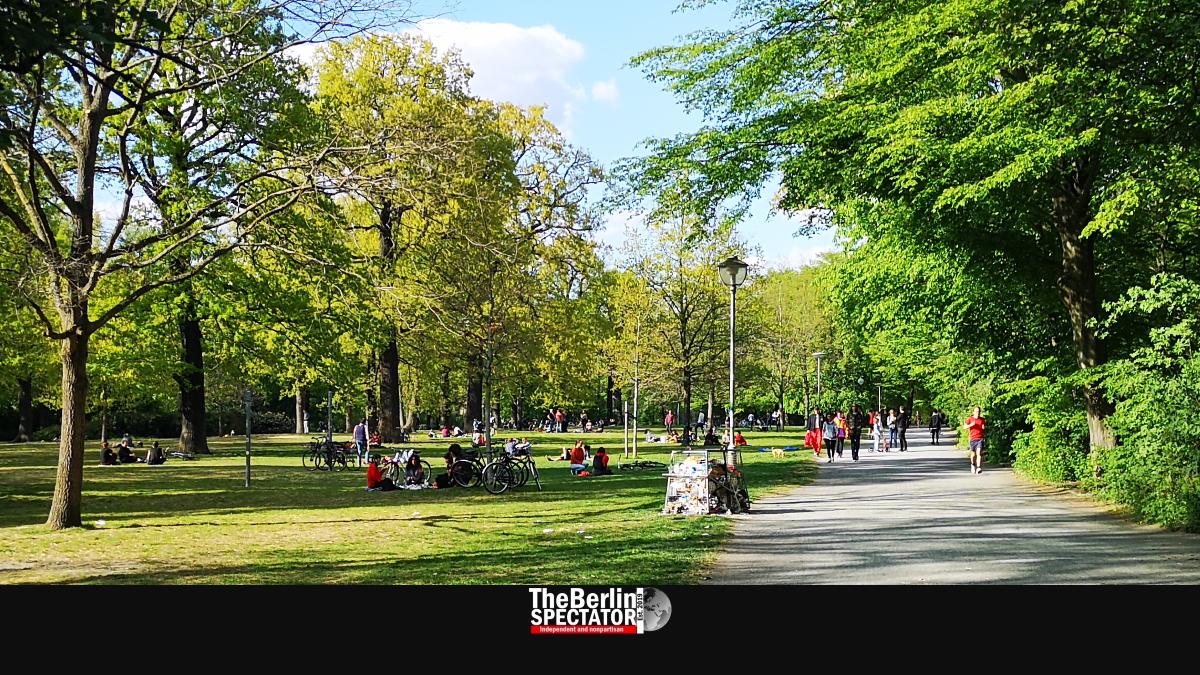 One of Berlin’s favorite parks is Hasenheide. Located in the city’s Neukölln district, it is the place for absolutely everyone, including families, dog owners, homeless people, party crowds — and drug dealers.

Berlin, April 27th, 2020. Update: February 19th, 2021 (The Berlin Spectator) — The ‘Hare Heath’, which is the direct translation for Hasenheide, offers it all. It is the kind of park families with children can spend the entire day at, especially in spring.

Name a park that has a pond, a zoo, a Hindu temple, a hill made out of war rubble, a rose garden, a ‘Peace Alley’, a dog area, an open air cinema and even an annual amusement park in May. Not even Central Park in New York City offers that much. In 2020 and 2021, the cinema was closed and the amusement park cancelled, due to Corona.

The Hindu temple at the park’s north-eastern end, will be the largest one of its kind in Europe. It’s erection commenced in 2008, but so far it could not be finalized because there are not enough donations. It’s golden top is great indeed. This might very well be the most beautiful temple in Berlin.

Hasenheide is also the perfect spot for newly enamoured couples. They hold hands and find quiet spots for kissing and making – beeeeeep (censored). And they do take their romantic walks on a boardwalk around Hasenheide’s little pond which ducks, partridges and at least one swan call home.

For 60 years, the ‘Hasenschänke’ kiosk has been offering everything people want, including beer, beer and beer, but also ice cream. It usually opens from early May to October. Once they are back in business, the homeless individuals who set up their tents in front of the store will have to make some room.

Right next to the kiosk, the rose garden’s benches are filled with those who want to stare at their cell phones instead of looking at nature, parents with sleeping babies in strollers, and flower experts. They might be able to explain what kind of flower this is (photo above) and why it grows in the rose garden. Hey! You’re in the wrong garden.

Just before Germany’s reunification, a project entitled ‘Friedensallee’ was established. It is being kept alive by gardening fans who plant ginkgo and rose trees all over the place. In 2016, it was Hasenheide’s turn to get its 32,823rd tree. Just kidding.

The old ‘Skatepark Hasenheide’, located at the park’s southern end, was officially closed during the beginning of the Corona crisis in the spring of 2020. But kids went there anyway until the police chased them away. Five minutes later, they returned.

In the center of the park, one of the nicest playgrounds in Berlin is a magnet for families with small kids. It offers slides, many places to climb, and a whole lot of sand to play in. Another nice spot for smaller children is the little petting zoo at the park’s northern end. Both the playground and the tiny zoo are open now.

Apart from all the romanticism and beauty, there is a problem: Hasenheide is being abused by drug dealers. Because they do not want to get caught when the police suddenly show up once in a while, they hide their drugs in the bushes. One of the issues is that they attract drug addicts who leave their syringes and needles. Sometimes, dealers there insult people who just want to take a nice walk.

But no dog will ever complain about Hasenheide. At the fenced-in dog run, they have all the space they need to play and run around like crazy. A bit further towards the west, the ‘Rixdorfer Höhe’, a small mountain, can be climbed. At the top, people in groups usually pour beer down their throats while discussing things. It is nice up there, but there is no view. The plants are in the way.

A memorial for Germany’s Rubble Women is located the the park’s north-western corner. The ‘Trümmerfrauen’ were the ones who removed all of the rubble that was left after fascist Nazi Germany was finally defeated. In 1945, the sculptor Katharina Szelinski-Singer came to Berlin. Sixty-six years ago, her ‘Trümmerfrauen’ sculpture was inaugurated.

The other monument at Hasenheide park is dedicated to an ambivalent figure, to say the least, namely Friedrich Ludwig Jahn, a nationalist and anti-Semite who lived from 1778 to 1852. Of course the Nazis admired him. Jahn is also the founder of the German gymnastics movement.

A few centuries back, in 1678, Hasenheide park was an actual hare hunting ground. In 1811, 209 years ago, Jahn founded Prussia’s first physical training place on the compound. A hundred and one years ago, in 1920, there were plans for turning these grounds into a park. The implementation took place in Nazi Germany, starting in 1936. After the war, the U.S. Army had a firing range in the park. Millions of tons of rubble were piled up at Hasenheide. It is all buried under the park.

In the summer of 2020, countless illegal parties took place at Hasenheide park. Almost every night, hundreds brought their booze and their loudspeakers and pretended nothing was going on by dancing and partying the night as if nothing was going on. Also they used the bushes as bathrooms and threw their trash all over the place. The police ended some of those parties, but many took place.

Murder at the Park

In early 2021, a man and a 17-year-old juvenile were beaten up badly. Since the second victim died a few days later, the homicide division took over the case. On February 24th, 2021, the suspected murderers were arrested.

But, on most days, Hasenheide is sort of peaceful. It has an area of 472,826 square meters (117 acres). In this park, there is a nice spot for everyone. You want good air, singing birds, humming bees, flowers and cold beer? Go there.